AIPI’s Position: Criminal Sanctions for Researchers Must be Abolished

The Indonesian Academy of Sciences (Akademi Ilmu Pengetahuan Indonesia, AIPI) argues that criminal sanctions included in the Draft Law on the National System for Science and Technology (RUU Sisnas Iptek) are counterproductive to Indonesia’s efforts to promote international research collaboration and must be removed. 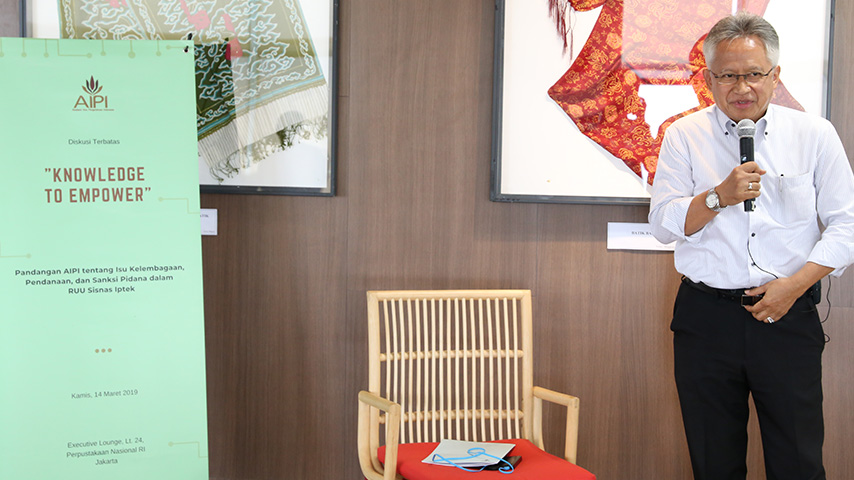 The Indonesian Academy of Sciences (Akademi Ilmu Pengetahuan Indonesia, AIPI) argues that criminal sanctions included in the Draft Law on the National System for Science and Technology (RUU Sisnas Iptek) are counterproductive to Indonesia’s efforts to promote international research collaboration and must be removed.

This position was put forward in a closed discussion on the theme of “Knowledge to Empower: AIPI’s Position on Institutional, Funding, and Criminal Sanction Issues in RUU Sisnas Iptek” on Thursday (14/3) at the National Library, Jakarta. As the title suggests, the discussion addressed three issues within the draft law: institutions, funding, and criminal sanctions.

Speakers at the event included AIPI Chair, Satryo Soemantri Brodjonegoro, speaking on institutions, Executive Director of the Indonesian Science Fund (DIPI), Teguh Rahardjo, on funding, and Indonesian Young Academy of Sciences (ALMI) member, Berry Juliandi, on criminal sanctions. Responding to these issues were the Secretary of the Directorate General of Research and Development Strengthening of the Ministry of Research, Technology, and Higher Education, Ir. Prakoso; Director of Budgeting Regulation Harmonisation from the Directorate General of Budgeting of the Ministry of Finance, Didik Kusnaini; and Director of the SMERU Research Institute, Asep Suryahadi. The discussion was moderated by Rival Ahmad from the Knowledge Sector Initiative.

RUU Sisnas Iptek, which will replace Law Number 18/2002 on the National System for Research, Development, and Implementation of Science and Technology, is currently being debated in the House of Representatives. The AIPI discussion aimed to provide input on the draft law to promote improvements in the governance of research and innovation in Indonesia.

Criminal sanctions for researchers are included in articles 74-77 of the draft law. Researchers undertaking high risk research, development, assessment, and applied research without obtaining a government permit face a maximum of two years imprisonment, or a maximum fine of Rp2 billion. If the activity endangers others, the length of imprisonment and the amount of the fine will increase. Foreign researchers without a permit can also be imprisoned for a maximum of two years or face a maximum fine of Rp2 billion.

According to Juliandi, criminal sanctions can be replaced by administrative sanctions targeting specific research activities. In addition, Indonesia can adopt globally enforced regulations, such as the Convention on Biodiversity in the field of biological research. If violations or crimes occur during research, these can be dealt with using the provisions in the Criminal Code and Criminal Procedure Code.

On the topic of institutions, Satryo Soemantri Brodjonegoro outlined AIPI’s view that science and technology institutions are currently not functioning optimally. The Indonesian Institute of Sciences (LIPI), which should focus on upstream development of science and technology, for example, is in fact conducting applied science and technology programs. The same is true of a number of ministerial research and development agencies that should be focusing on improving public services, but are also undertaking applied scientifical and technological research. As a result, the Research and Development Agency of the Ministry of Agriculture now has 127 patents, LIPI 72 patents, and Agency for the Assessment and Application of Technology (BPPT) 95 patents.

In terms of research funding, AIPI Chair Brodjonegoro underlined the importance of an independent research funding agency or institution. This agency must be independent, professional, and responsible for promoting development and application of science and technology, with a stable budget outside of the National Budget (APBN), and based on accountability and transparency. There is no need to create a new agency. Rather, an existing agency can be assigned this role. “This agency must be independent, not a government agency. Why does it need to be independent? Because science and technology must be useful for the public, not merely for the government,” he was quoted by Antara News, Kamis (14/3) as saying.

AIPI has outlined its position on institutional, funding, and criminal sanction issues in the draft law in a consolidated document. For each issue, AIPI includes recommendations on the content of articles which require revision. There is also an annex on governance of science, technology and innovation in Thailand, Japan, China, Germany and England. At the close of the event, this document was handed over to representatives of the Ministry of Research, Technology, and Higher Education, Ministry of Finance, media, and all participants.

AIPI’s position paper can be downloaded through this link.

News on this event: