Data innovation as a new source of evidence for policy making: the experience of the New Zealand Data Futures Forum

Kenneth Benoit and Kenneth Cukier during a public lecture at the London School of Economics in February 2015 have mentioned that ‘the ubiquity of big data has the potential to transform the way we approach social science.’ 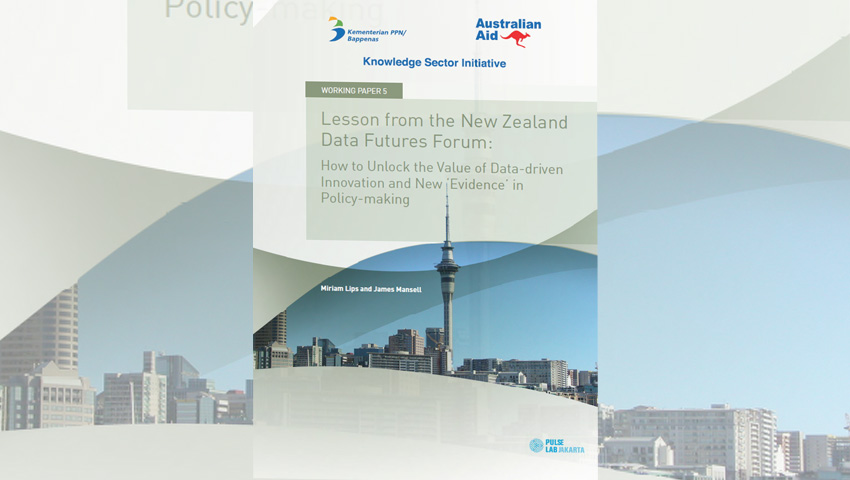 Kenneth Benoit and Kenneth Cukier during a public lecture at the London School of Economics in February 2015 have mentioned that ‘the ubiquity of big data has the potential to transform the way we approach social science.’

In other words, the data revolution is challenging the social scientific model and how it informs policies and is making available to governments new forms of evidence which can inform the design, implementation and evaluation of public policies.

But can we maximize the opportunities that big data provides to government while minimizing the risk and concerns related, for example, to cross-government information-sharing and citizens’ privacy?

I discussed these issues with Miriam Lips, Professor of Digital Government at Victoria University of Wellington and Member ofthe New Zealand Data Futures Forum (NZDFF) who, in November 2014, gave a key note speech with the title Designing New Zealand’s Data Future - a partnership between political leaders, government, business and academia at the International Conference on Data Innovation For Policy Makers held in Bali and who has co-authored with James Mansell a working paper for the Knowledge Sector Initiative and Pulse Lab Jakarta with the title Lessons from the New Zealand Data Futures Forum: How to Unlock the Value of Data-driven Innovation and New ‘Evidence’ in Policy-making.

The working paper describes the process kick-started in December 2013 by the Ministers of Finance and Statistics with the establishment of the NZDFF to examine, report and engage with the general public on how New Zealand could maximize the benefits of the data revolution while minimizing the risks of potential harm, such as privacy breaches and unethical or misuse of data.

New Zealand and Indonesia are very different countries; however, the data revolution travels across countries and levels differences that exist in income per capita, population size, and socio and economic indicators. The relevance of the working paper for a country like Indonesia is that the data revolution is already here, invisible yet here.

Moreover, with a project like the Knowledge Sector Initiative which has been designed to be implemented over 15 years and works to find ways to strengthen the knowledge –to-policy process in Indonesia, we cannot ignore the fact that the data revolution is already here and it is changing not only the way we have to approach social science research but also how new types of evidence generated by big data inform public policy.  This is why Knowledge Sector Initiative collaborates very closely with initiatives such as Pulse Lab Jakarta.

The aim of the working paper is to derive food for thought which can be relevant to Indonesia, from the lessons learned from the process undertaken by a national government (in this case New Zealand) to find ways maximize the use of big data for public policy while at the same time responding to citizens’ concerns about their privacy.

Arnaldo Pellini (AP) – Miriam Lips, you mention in the working paper that one of the factors of the success for the data –driven innovation in New Zealand initiative was the strong and long-term political support. I agree that it is usually a key success factor, however political leadership does not emerge in a vacuum. Was there a national debate? Was it a pre-requisite for political leadership?

Miriam Lips (Lips) - In my view, long-term political leadership was critically important for two main reasons: 1) to mobilize necessary resources for organizing this national debate; and 2) to have a strong mandate for a nation-wide public debate with all stakeholders. However, you are correct in assuming that this political leadership didn’t emerge in a vacuum: during the Forum’s engagement, it was amazing to learn about so many interesting data innovation initiatives already underway in New Zealand, often under the radar. The Forum tried to support and facilitate learning opportunities from this ‘data innovation movement’ in New Zealand by incorporating interesting projects and initiatives into their three discussion documents and sharing them with people at the Forum’s public engagement activities.

AP - You mention in the working paper the NZDFF principles of ‘values, inclusion, trust, and control’ have resonated in the public opinion and with international thinking in the data innovation area. The principles seem to be quite universal and in constant development and evolution in any society. So, how would you address the position that NZDFF may have worked because of the norms and values that are specific to the New Zealand society?

Lips - As you can read in the paper, these four guiding NZDFF principles resonated strongly with the various stakeholders in data-driven innovation in New Zealand. This is not surprising perhaps, as they were constructed on the basis of input and feedback received in the Forum’s debate. Especially the fourth NZDFF principle of ‘giving individuals and communities greater control over their data’ was very well received, as New Zealanders are very strong on protecting their privacy and also M?ori, who are community-oriented, are very keen to have more control over their data within their iwi (i.e., M?ori communities). Other characteristics of the New Zealand population, such as being innovative and having a high uptake of digital technologies; strongly embracing inclusive societal values, such as multiculturalism, fairness, transparency and integrity; and having a relatively high trust in government, also lead to a situation in which New Zealand is very well positioned to deliver on the Forum’s vision and create the positive feedback loop mentioned in the paper of enhancing the value generated by data-driven innovation through high inclusion, increasing trust and providing individuals and communities with more control over their data.

AP - Let me ask a question related to international development. In development there is a constant debate about identifying local / context specific solutions to development problems (including probably data innovation) and replicability across countries and cultures of development interventions. Do you think that data innovation, because of its technological characteristics, is easier to apply across countries?  What I mean is this: it seems to me that data innovation has strong technological elements that can level differences in income, size, and geography and which that can be easily transferred particularly with middle income countries such as Indonesia? Do you think that is the case?

Lips - I don’t think that the technological elements of data innovation make it easier to replicate data innovation best practice across countries – at least not the technological characteristics per se. However, I do think that the four guiding NZDFF principles together, as they are universal principles as you pointed out earlier, make it possible to replicate best practice across countries. Technology is a critical enabler of the application of these four principles in my view.

AP - Do you know of any other countries that have looked and studied in depth the NZDFF initiative?

Lips - We know that many countries are interested in learning from the NZDFF experience and agree with the four guiding NZDFF principles for data-driven innovation. We also are aware that there is a lot of interest in specific data-driven innovation projects in New Zealand, especially the Social Investment Approach undertaken by the New Zealand Government and the Sensing Cities initiative in Christchurch, which are unique, world-leading projects.

AP - You conclude the paper by noting that there is a structural disconnect between the policy ‘stream’ and the data scientists’ ‘stream’ in government agencies. The result is that the traditional policy process in New Zealand government agencies has not changed much and resists the direct engagement of data scientists with senior ministers. Why do you think this is not changing and taking full advantage of the opportunity provided by data innovation?

Lips - The problem here is that policy advisors feel threatened by data scientists, as their ‘monopolist’ advisory relationship with their Minister is at stake. Other issues are the lack of data innovation understanding and capability amongst policy advisors, and the lack of understanding of the policy process amongst data scientists: we will need to educate both groups in order to be able to successfully integrate data innovation into the policy process.

AP - Do academics need to be scared of data innovation?

Lips - Academics, especially social scientists, have a very important role to play in data innovation. When you apply the four guiding NZDFF principles and in particular the fourth principle of giving people more control over their data, you are actually enabling the democratization of research capability amongst your population. Social scientists in particular have a critical role to play in educating people on how to interpret and use their data in a responsible way, and also to ask the right questions about data (re-)use, such as questioning potential bias in the data sample, the application of predictive models rather than considering causal relationships, and algorithms underlying decision-making processes. However, as a result of this democratization process and a shift towards decentralized models of data-sharing and use, some traditional institutions do need to be scared of data innovation in my view. Think for example about National Statistical Offices, which were set up long before the digital age and use a monopolist, centralized model of data-sharing where people’s data is collected from them and then stored away with little opportunity for non-expert individuals to access, interpret, analyze, and re-use their own data. We should not forget that data isn’t neutral but has a certain informational value in a particular social context. Consequently, data collection, interpretation, analysis, and knowledge production should not be separated activities but go hand-in-hand to achieve effective forms of research evidence.