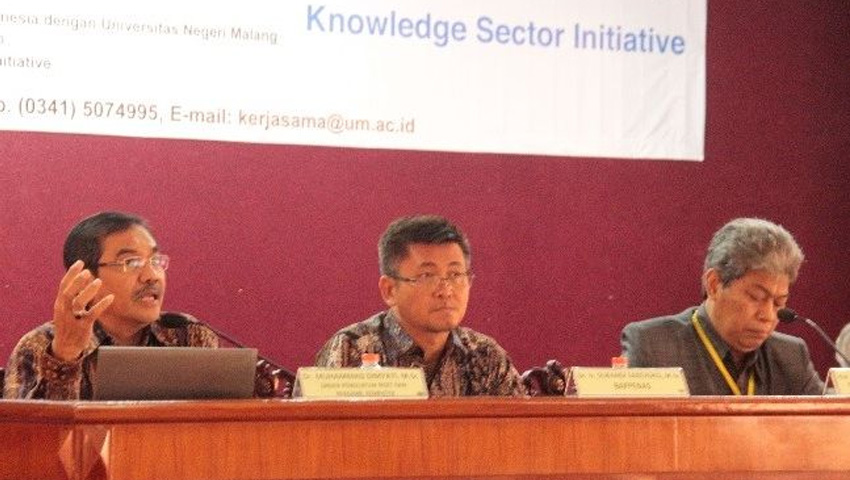 Akademi Ilmu Pengetahuan Indonesia (AIPI) and the Social Science Commission (Komisi Ilmu Sosial, KIS) of AIPI in cooperation with the University of Malang (Universitas Negeri Malang, UM) organised a seminar on higher education on 21 November 2015, in Malang. This is the third in a series of seminars supported by the Australian Government through the Knowledge Sector Initiative (KSI) . The focus of the seminar conducted by KIS AIPI was to investigate and report on higher education in Indonesia. The Rector of UM, Prof Dr A. H. Rofi'uddin, opened the seminar, which was attended by more than 70 participants.

The seminar brought together academics from 28 universities in East Java, including the University of Malang, Brawijaya University, Surabaya University, Sepuluh Nopember Institute of Technology (ITS) and others to discuss the current state of higher education and ways to improve the quality and delivery of education, particulary in the sciences and research.

In a keynote speech, Prof. Mayling Oey-Gardiner from AIPI asserted that,"The main barriers to progress are a lack of well trained and qualified human resources and the need for improvements in the quality of higher education institutions so that can become more competitive internationally. Professor Mayling identified several challenges faced by higher education in Indonesia: 1) Indonesia has yet to contribute significantly to the international science world; 2) Indonesian higher education is dominated by teaching institutions rather than research institutions; and 3) Academic career paths in higher education tend to be linear or mono-disciplinary - this is inconsistent with global trends in teaching and research that tends to multi-, inter- and trans-disciplinary approaches.

Similar views were expressed by Dr. Muhammad Dimyati, Directorate General, R&D Strengthening, Ministry of Research, Technology and Higher Education, who pointed out that the current research situation is alarming especially as research has yet to make a significant contribution to the welfare of Indonesian society. He said that most research in Indonesia is not undertaken with the spirit of discovery, but only to meet obligations. Research often generates findings and a report but is then discontinued or discarded for various reasons. "Social and humanities research needs to be encouraged so that it can contribute and foster nation-building. Bureaucrats should minimise barriers and obstacles so that researchers can carry out more productive research that contributes to innovation,"said Dimyati.

This issue was echoed by Prof Dr. Lieke Riadi from Surabaya University who asserted that the research process often stops once research publications, reports or patents are produced and also that research findings are rarely utilised at an industry or community-service level.

Prof Dr. Heru Setyawan from ITS emphasised that most innovation comes from the basic research process rather than before it is commercialised. He suggested that, "A thriving research culture is apparent when the time spent by lecturers doing research is greater from their teaching time, and high number of students are involved in faculty research."

This series will continue with another seminar to be held outside of Java to identify challenges and opportunities in Indonesia's higher education system. The final output of this series could inform the government on the important role of higher education in creating prosperity through the promotion of innovation and the production of qualified human resources. These are essential if Indonesia aspires to be competitive in the international arena.