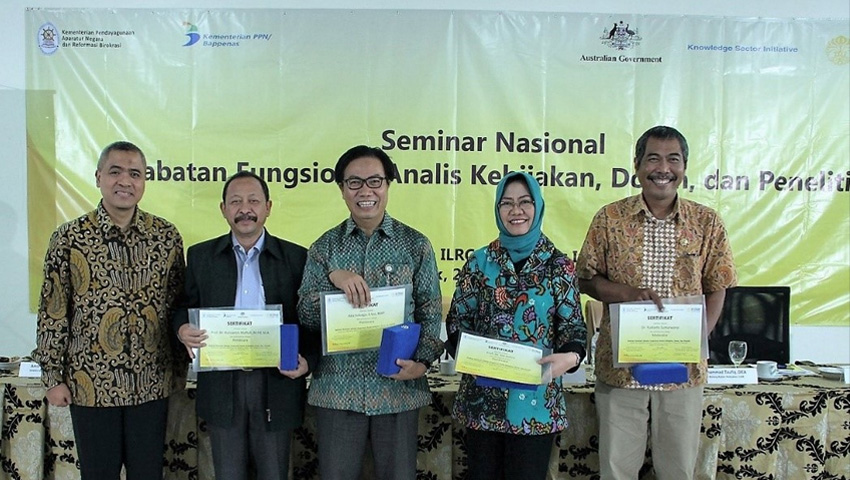 A number of issues emerged during the one-day discussion. For example, Aba Subagja from KemenPAN-RB said that functional positions were still considered ‘second rate’, and were less attractive and promising for career development.

Prof. Bunyamin from Kemenristekdikti added that of state universities (PTN), only 6 percent had the functional position of lecturer, with fewer research outputs than neighbouring countries such as Singapore, Malaysia and Thailand. He said it was the same for researchers, who were not much better off than lecturers. Prof. Bunyamin said there was no career path for researchers, even in renowned universities such as the University of Indonesia and Bandung Technological Institute. Therefore, Kemenristekdikti is developing a guideline for researcher career paths at universities.

Prof. Eko emphasised that the use of evidence and knowledge in policy making was the capacity of Echelons I and II. Functional positions such as researchers from universities, research and development agencies, and policy analysts, provide sufficient policy substance based on high quality knowledge and evidence to be used by policy makers. The three existing functional positions (policy analyst, lecturer and researcher) are expected to improve the use of high quality evidence and knowledge in a better public policy making process.

Prof. Mayling Oey-Gardiner said the Government needed to grant freedom to certain universities to become research universities instead of teaching universities. So far, the Government of Indonesia still relies on a small number of institutions to produce science and technology research, such as the Technological Assessment and Implementation Agency (BPPT), the Indonesian Science Institution (LIPI) and the Center for Science and Technology Research (PUSPIPTEK). The Government’s efforts in creating a research functional position, and its guiding regulation, are expected to increase the number of researchers and research activities in universities and other public organisations.

To ensure that the benefits of research can directly impact the people, Prof. Siti Zuhro from LIPI suggested that researchers could also be policy analysts, who could speak in a language understood by policy makers. In the World Bank’s World Governance Indicator, Indonesia is still ranked very low on the quality of its decisions in policy making [see https://www.kemenkeu.go.id/en/node/42727].

As a follow up to this national seminar, KSI will bridge a number of discussions, including a Focus Group Discussion (FGD) with KemenPANRB, Kemenristekdikti, LAN and university partners to implement the researcher functional position, collaborate in the policy analyst functional position, and elaborate the results of the University Barriers to Research study to obtain a more comprehensive picture of the research problems in Indonesia.