Two major GoI ministries that spearhead social development in the country –Ministry of Social Affairs (MoSA) and BAPPENAS- came to KSI in October to learn more about M&E, particularly on the approaches and tools used by KSI. 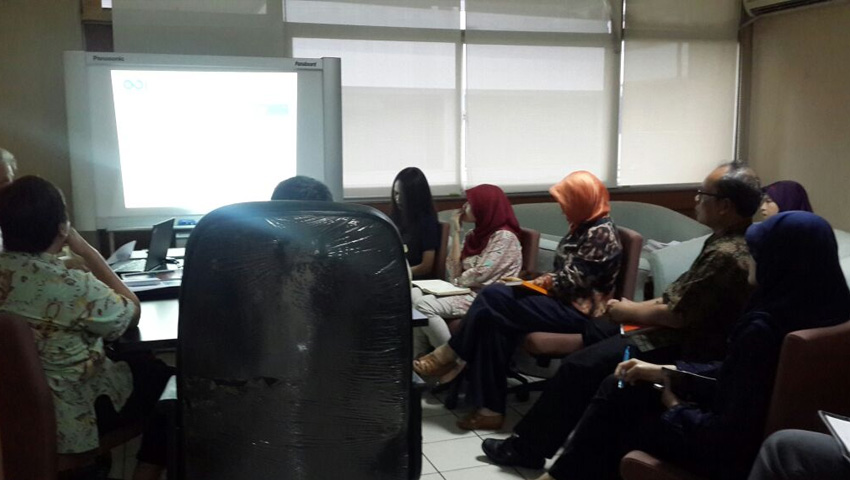 Two major GoI ministries that spearhead social development in the country –Ministry of Social Affairs (MoSA) and BAPPENAS- came to KSI in October to learn more about M&E, particularly on the approaches and tools used by KSI. Lia Marpaung (KSI’s M&E Specialist) and John Young (KSI M&E Lead, seconded from ODI) met representatives of both ministries on 18 and 21 October 2016 respectively.

At BAPPENAS, the Director for Monitoring, Evaluation and Control of Sectoral Development, Ahmad Dading Gunadi, hosted the knowledge sharing gathering at his office. The meeting was attended by about 15 staff from the directorate and two staff from the Directorate for Regional Development Performance Evaluation. The session started with BAPPENAS sharing their current M&E framework and priorities. This was followed with a presentation by John Young on a systematic approach to M&E, especially for a program such as KSI seeking to influence policy, including reference to approaches being used in other countries including the UK and South Africa.

Lia Marpaung shared her experience in using storytelling methods e.g. stories of change and most significant change techniques, to document changes and achievements as a result of a program interventions. She explained that these approaches are particularly useful because they can both communicate positive changes as a result of development interventions, and meet the government’s accountability needs. In an interactive Q&A session, BAPPENAS staff were keen to understand more about Performance Stories, Stories of Change, and Outcome Mapping, and discussed their possible application in their programs.

The meeting with the Ministry of Social Affairs (MoSA) on the 21st October 2016 included Bapak Andriana Pudjalaksana, the Head of Program Monitoring and Evaluation of the Directorate-General of Social Protection and Assurance (Ditjen Linjamsos), and Ibu Diandini, the Monitoring and Evaluation Analyst for Program and Reporting of the Ditjen Linjamsos. They were keen to get KSI’s advice on the ministerial program logic and performance indicators to meet the national development agenda. John and Lia shared some general ideas M&E for programs, but most of the time was spent discussing the specific indicators for poverty reduction and disaster management programs, used by their directorate-general. During the discussion, MoSA expressed concern that there is limited expertise in their organization for developing effective M&E systems and requested KSI to facilitate an M&E awareness capacity building event for their staff, which they would be happy to pay for out of their own budget.

At the end of these workshops, both Bappenas and MoSA requested KSI to establish regular knowledge exchange sessions between Bappenas and KSI. They also expressed interest in developing an M&E Working Group including government staff and Indonesian M&E practitioners and to establish a platform to strengthen and promote the use of M&E in the public sector.