KSI Knowledge Sharing Session: ‘How do you Evaluate a Mental Revolution?’

On 25th January KSI organized a public knowledge sharing meeting titled "How do You Evaluate a Mental Revolution?”. Fred Carden presented and discussed with the audience a possible framework to evaluate and generate evidence about progress in the changes of attitude and behaviour that are required by President Jokowi's call for a mental revolution across the Indonesian society. 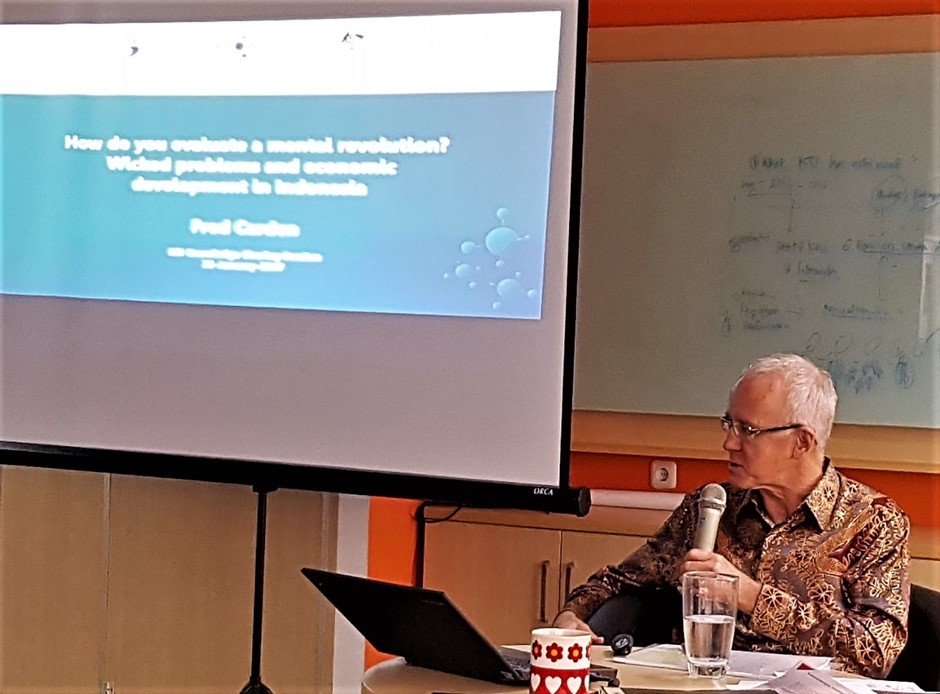 In his Nawa Cita electoral platform, President Joko Widodo called for “a mental revolution” of civil servants and state institutions to overcome structural weaknesses in the economy and state authorities, and the rise of intolerance and sectarian conflicts. After a promising start, however, the mental revolution movement appears stagnant. The sustainability and success of a mental revolution require continuous information on the development of activities related to a mental revolution, including progress (or otherwise) in attitudes and behaviour change based on existing evidence to achieve the desired changes.

The issue of evidence-based attitudes and behaviour change with respect to a mental revolution is central to a paper by former KSI staffer Fred Carden, entitled, ‘How do you evaluate a mental revolution? Wicked problems and economic development in Indonesia.’ The paper explores the role of evaluation in providing evidence and promoting change. It also suggests that evaluation has not been strong in addressing wicked problems–problems that are difficult to grasp, are complex, politically contentious and resistant to resolution.

To invite comments and disseminate findings of the paper, KSI organised a knowledge sharing session on 25 January 2017 in Jakarta. It provided a platform for Fred Carden to present and discuss the complex topic of evaluating a mental revolution. The discussion was attended by policy makers, researchers and academics from the Indonesian Institute of Sciences (LIPI), the Ministry of Research, Technology and Higher Education (Kemenristekdikti), the Coordinating Ministry of Human Development and Culture (Kemenko PMK) and the Indonesian Academy of Sciences (AIPI). KSI staff member Arnaldo Pellini moderated the discussion and explained that through his paper, Fred offered a potential framework to define a mental revolution, identify mechanisms and define progress, such as in behavioural change and change in action. Currently, the concept of a mental revolution is still unclear. Taufik Abdullah, the former head of LIPI, said he has little, if any, understanding about what defines a mental revolution.

This discussion is only in its early stages and the framework offered by Carden through his paper still needs to be tested. Further discussions between knowledge producers, policy makers and other stakeholders will be needed to develop clearer scientific definitions, mechanisms and frameworks in an attempt to evaluate a mental revolution.

Fred Carden is an experienced international development professional and has built an international reputation for his work in the field of evaluation. He has extensive experience, especially in South and Southeast Asia and East Africa (including three years with KSI). Recently, he set up ‘Using Evidence Inc.’, a consultancy working in Canada on research and evaluation that focuses on increasing the use of evidence in public policy.