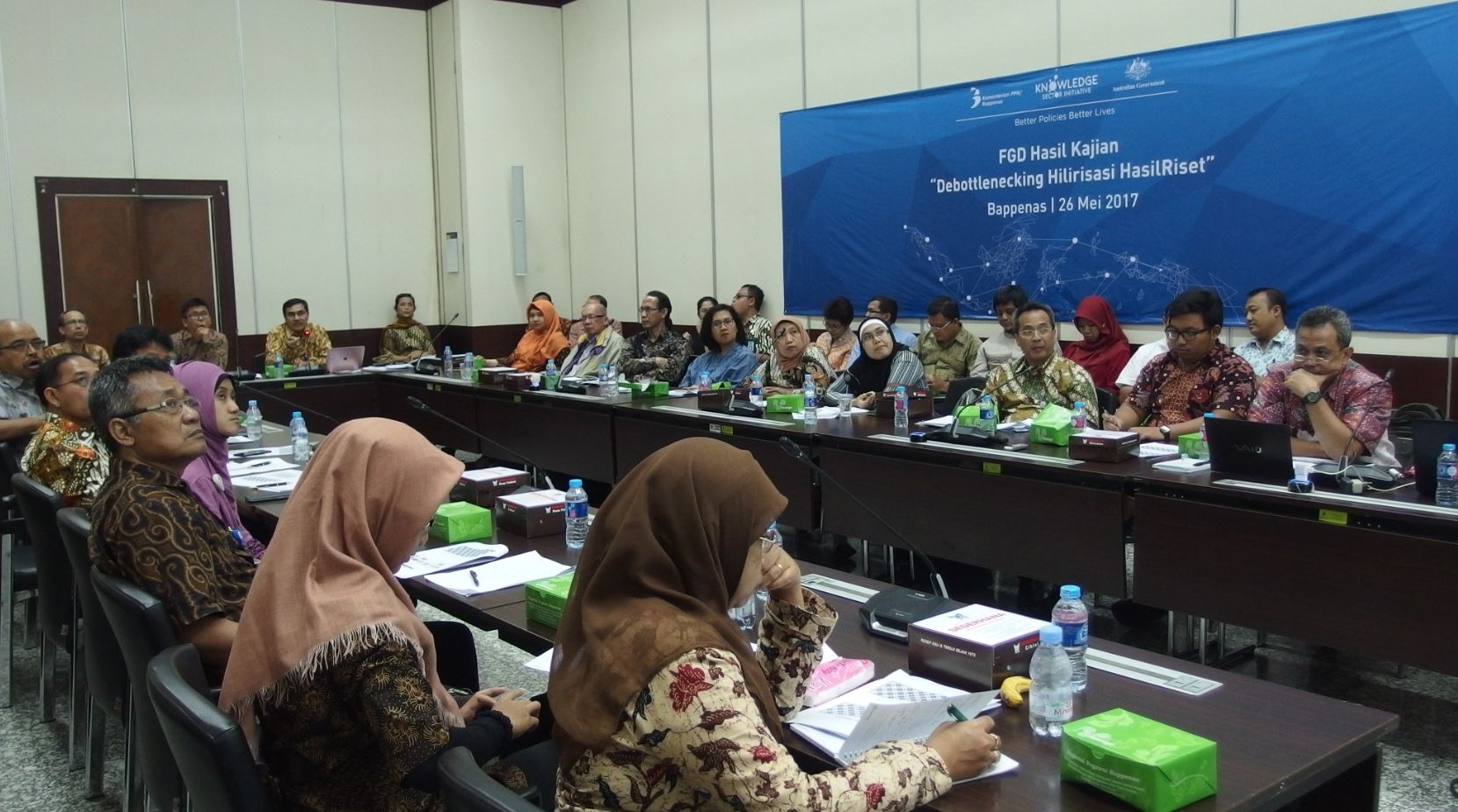 “Only 6 percent of the 15,480 research projects by universities or government institutions, funded by the state budget in the financial year 2016, led to intellectual property and research prototypes.”

Dr Muh Dimyati was speaking at a focus group discussion supported by KSI at the Ministry of National Development Planning/Bappenas on 26 May 2017. This discussion aimed to discuss a draft policy brief on removing the barriers that currently constrain downstreaming research outputs into commercial products. Kemenristekdikti and Bappenas, with support from KSI, conducted a quick study led by a consultant team from the Indonesian Institute of Sciences (LIPI) to produce the draft policy brief.

Dr Dimiyati said there were wider issues associated with downstreaming research outputs into commercial products in Indonesia. While Dr Subandi, the Deputy for Human Development, Society and Culture, Bappenas, said a number of existing regulations issued by internal ministries and agencies had been part of the problem of downstreaming research outputs into commercial products.

The draft policy brief highlights concrete examples of constraints related to the health and food security sectors, for example in the food security sector, there has been much discussion in Indonesia to address the lack of meat supply for domestic need. A number of scientific research projects have produced high-yielding varieties of semen, however existing regulations inhibit the easy distribution of these varieties to farmers. In the health sector, Indonesia has an abundance of species of herbal medicines and phytopharmaca. However due to policy constraints, out of more than 8,000 herbal products registered with the National Agency for Drug and Food Control (BPOM), there are only 45 standardised herbal medicines and eight phytopharmaceutical products.

Based on inputs from the focus group discussion, the draft policy brief needs some revision. The recommendations of the policy brief should address policy problems in four sectors, including the development of rice, cow breeding, health equipment and medicinal raw materials. Addressing regulatory issues in these four concrete sectors can be a way to alleviate constraints to downstreaming research outputs into commercial products.

This revised policy product will be used by Bappenas and Kemenristekdikti to promote the reform of regulations that have created unnecessary barriers to downstreaming research outputs into commercial products.