Indonesia's economic transformation, which is a major strategy to recover from the Covid-19 pandemic, requires research and innovation as the key to increasing productivity. The government as a regulator and supervisor has an important role in promoting research and innovation, as well as the building of a robust knowledge and innovation ecosystem. The fact is, however, economic transformation in Indonesia has to face many challenges. This was mentioned in the keynote speech of the Head of the National Development Planning Agency (Bappenas) Suharso Monoarfa in the webinar “Indonesia's G-20 Presidency: Economic Transformation to Recover Together and Recover Stronger” on Thursday (24/2/2022).

This was mentioned in the keynote speech of the Head of the National Development Planning Agency (Bappenas) Suharso Monoarfa in the webinar “Indonesia's G-20 Presidency: Economic Transformation to Recover Together and Recover Stronger” on Thursday (24/2/2022). The speech was read out by the Deputy for Economic Affairs of Bappenas Amalia Adininggar Widyasanti. The webinar was held in collaboration with the Knowledge Sector Initiative (KSI) with T20 Indonesia and Katadata.

The resource persons in this webinar were Deputy for Economics at Bappenas Amalia Adininggar Widyasanti and Deputy for International Economic Cooperation at the Coordinating Ministry for Economic Affairs Edi Prio Pambudi. Among the discussants will be the Executive Director of the Center for Strategic and International Studies (CSIS) Yose Rizal Damuri and the Director of SMERU Widjajanti Isdijoso. 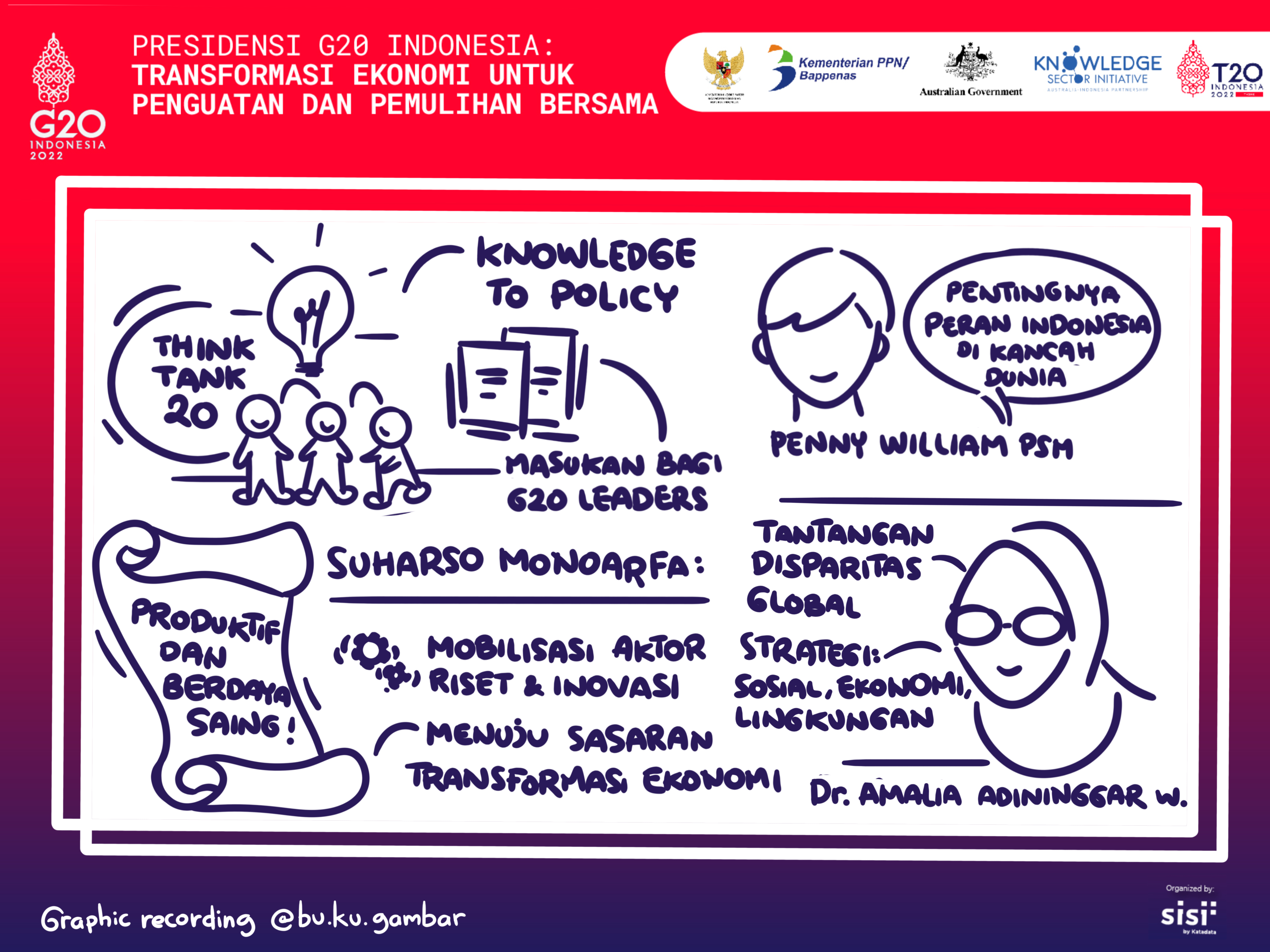 According to Suharso, Indonesia's economic had to grow at 6-7 percent per year if we wanted to achieved a long term, stable growth and stepped out of the middle-income trap before 2045. Bappenas estimated that if the post Covid-19 growth could be achieved at maintained until 2045 at  6 percent per annum,  Indonesia would be able to free itself from the trap in 2043, approximately more than two decades from now.

"South Korea's experience shows that in 14 years they can raise their status from an upper-middle-income country to a high-income country. The important keys for South Korea are economic transformation, research and innovation, as well as the great commitment of the government and its people," said Suharso in his remarks delivered by the Deputy for Economics of Bappenas.

Suharso added that Indonesia needed to redesign its post-pandemic economy, which would not only bring Indonesia to a pre-pandemic state, but turned it into a better one pursuant to the impact caused by the pandemic. For this reason, economic transformation is a key point in achieving the vision of the Golden Age of Indonesia in 2045. However, this transformation requires research and innovation as the key to increasing Indonesia's productivity.

The redesigning of the post-pandemic Indonesian economy, continued Suharso, should motivate all parties to collaborate to promote the implementation of inclusive and sustainable economic transformation. Competitive human resources are the most important part of economic transformation to achieve the vision of Indonesia Gold 2045; improving the quality of education, research, and innovation; knowledge; and the implementation of evidence-based policies is an important point for Indonesia to boost its competitiveness.

“Improving the quality of human resources is multidimensional in nature and requires active cooperation from all stakeholders. Therefore, it is time to collaborate to create a productive and competitive Indonesia," said Suharso.

Regarding the global economic recovery from the pandemic, according to Amalia Adininggar Widyasanti, the process still faces a number of challenges. First, there are still differences in the speed of recovery within a region or between countries. This has become an important issue in the G-20 under the Indonesian Presidency. Second, there is the difference regarding liquidity capabilities between the developed and developing countries; and third challenge is the increase in private and public debt.

“Besides these global risks, there are also domestic risks in Indonesia. First, the recovery of  the business sector has not been optimal. It can be seen from relatively low demand for credit. Second, Indonesia's unemployment rate has not returned to pre-Covid-19 levels. And third, the benefits of development in Indonesia has not been equally distributed, with the western part of Indonesia  enjoying most of it," said Amalia.

Amalia added, Indonesia had to wake up and grow much faster than before the pandemic. In the five years before the pandemic, the Indonesian economy could grow at 5 percent per year. Meanwhile, economic growth of 5 percent has not actually been able to bring Indonesia to reach or step out of the middle income trap before 2045. According to Bappenas assessment, she added, if Indonesia wanted to be able to achieve Indonesia's Vision 2045, then the average economic growth needed to be at 6 percent per annum.

Therefore, continued Amalia, it was urgent for Indonesia to carry out economic transformation as soon as possible. This was because Indonesia's economic structure still relied on non-processed commodities, thereby added values could not be optimally generated.. What was worse, the workforce in Indonesia was high, but the available job opportunities were not enough. Infrastructure avalability was another issue. Indonesia, which consists of thousands of islands, needs to improve infrastructure connectivity to reduce logistics costs between provinces or regions.

To accelerate this economic transformation, according to Amalia,  six major strategies should be applied to support inclusive and sustainable development in Indonesia. These six strategies included capacity building of human resources; productivity of the economic sector; green economy; digital transformation; domestic economic integration; and the relocation of the nation's capital city (IKN). According to her, the transfer to the new capital city (IKN) was not only a transfer of administrative matters, but also an effort to create a new source of economic growth in eastern Indonesia. This was an integral part of Indonesia's economic transformation strategy.

“Five things should be addressed if we wish to realize economic transformation in Indonesia. First, there needs to be a good synergy between developed and developing countries to jointly overcome and face global challenges in order to recover together. Second, developed countries can provide access to liquidity and other related programs, such as access to technology and health to promote partisanship, equality, progress, and prosperity among countries in the world," said Amalia. 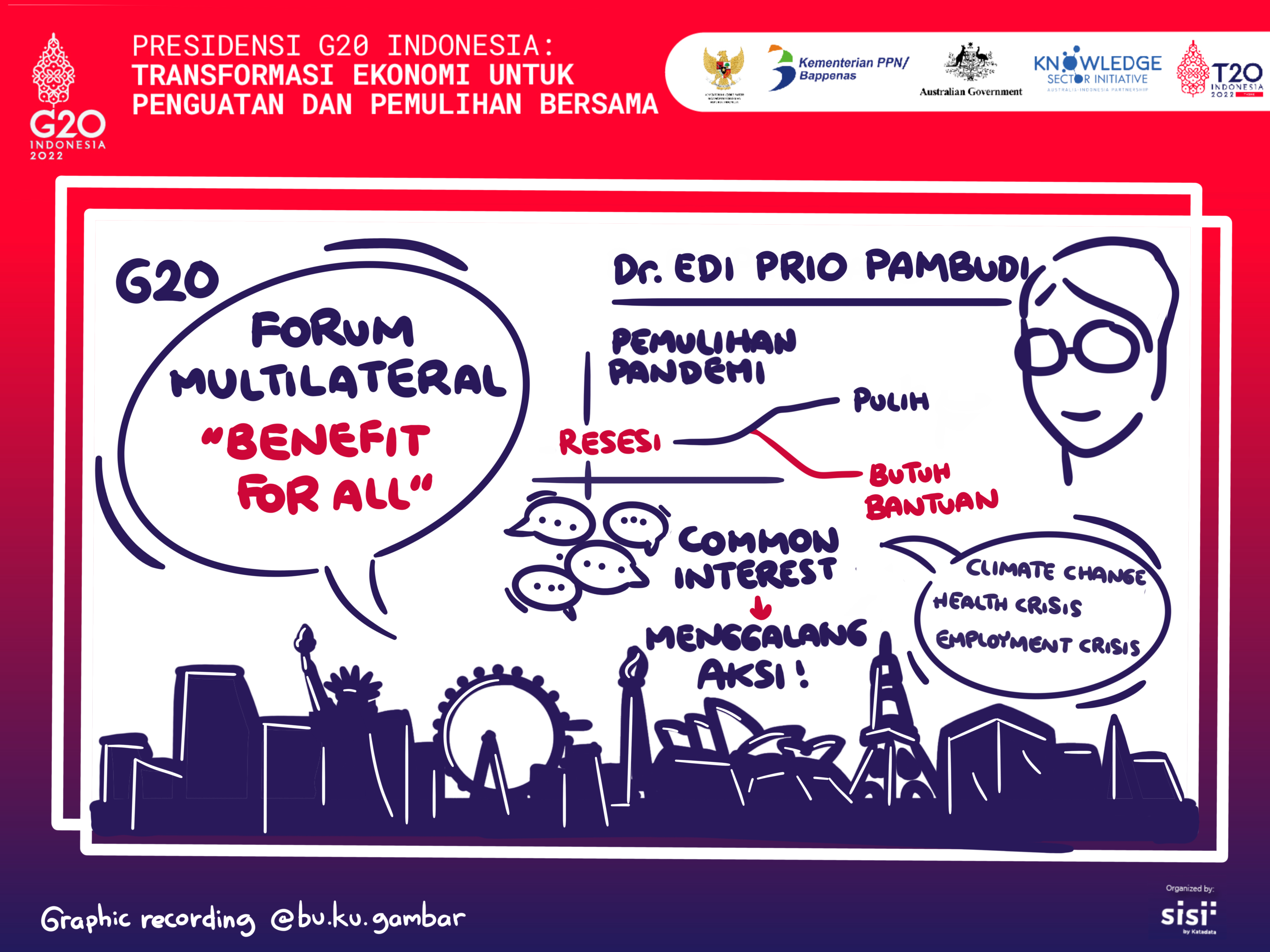 Third, continued Amalia, in the G-20 under the Indonesian Presidency, the Government of Indonesia has been demonstrating a commitment to promote economic transformation, create added values and diversify the economy, as well as increasing productivity to become a developed country. Fourth, through G-20, Indonesia can benefit from other countries on how to transform its economy and collaborate in areas that need improvement.

"Lastly or fifthly, Indonesia's economic transformation will be based on inclusiveness and sustainable economic development, in line with the 2030 Sustainable Development Goals (SDG's) targets and encouraging a sustainable recovery approach," Amalia said.

Meanwhile, regarding matters to prepare to accelarate global economic recovery, according to Edi Prio Pambudi, two years after the emerge of the pandemic, there is still no clear clues on how to conduct recovery. What we witness now is the claim coming from some countries that they have recovered from the pandemic while others cry for sufficient supply of vaccines. It is believed that low vaccination rate certain areas will trigger the birth of new variants, and this is potential to create  a global panic again. Inequal distribution of vaccine impedes on the global economic recovery.

Another urgent matter to deal with was triggered by the digital transformation that happened prior to the pandemic. When it first happened, rising unemployment was the corresponding phenomenon. During the pandemic, digital transformation accelarates. It creates benefits, but also inequality. This issue was deemed urgent to be discussed in the G-20 under the Indonesian Presidency.

“Climate change also needs a solution. Of these three things, this is what we will bring to the G-20 Presidency. First, yes, we must recover first. The economy cannot recover if health problems prevail. Second, there is this risk related to digital transformation. What will happen to those with limited digital abilities? Then, there is the issue of energy transition, which requires large funds. With the pandemic, countries in the world are faced with rapid increase of loans. This will hamper ability to mobilize funds for provision of health services, energy transition, and infrastructure development," said Edi.

Yose Rizal Damuri seconded the six major economic transformation strategies presented by Bappenas. According to him, these strategies were closely related to what Indonesia or other countries were fighting for at the G-20 or at the global level. He picked green economy as an example of the problem. For Indonesia, without a stronger cooperation with other countries, and a mechanism to support it at the global level it would be hard to make green economy a reality. Everything will be easier to achieve if the G-20 countries support the mechanism.

“Indonesia's biggest challenge is how to find common aspirations or interests from G-20 or non-G-20 member countries. This is important to develop a mechanism or system at the global level that will support resolution of existing problems,” said Yose. 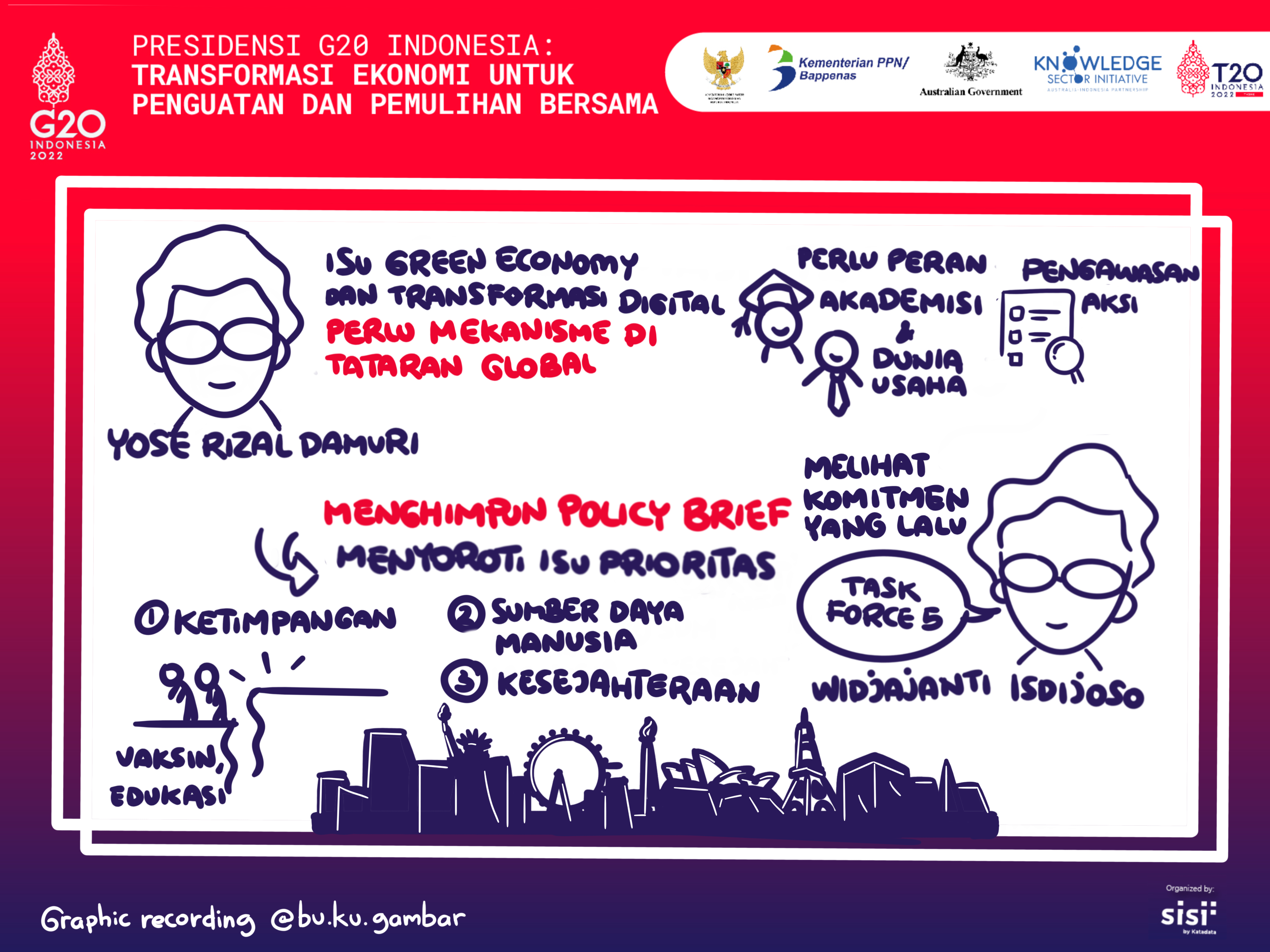 Yose also touched on the role of the business sector. According to him, their role was very important, especially to bring us  together out of the current problems. After all, economic recovery was dependant of recovery of the health sector. Health recovery could be accelarated if support was provided by the business sector . However, the business  sector should not see this from the profit-taking perspective. Instead, it had to reach out to much bigger goals.

Meanwhile, Widjajanti Isdijoso conveyed that inequality in human resources and welfare could motivate countries to learn together and refer to this as a basis for building joint commitments. If digital transformation could not be done, there would be consequences we had to face. It would not be only the lost job opportunities, but also how necessary infrastructure, digital literacy, and basic education had to be developed. These issues are for the G-20  members to deal with in the future.

“ And  we still have issues on human resources in general. These are issues related to health, malnutrition, reduced health services, and the impact of Covid-19, all of which constitute major issues. Regarding children, there is the issue of child labour. The economic crisis tends to aggravate this situation (worsening the phenomenon of child labour). This will be the main issue,” said Widjajanti.

Widjajanti also conveyed the need for corrective steps towards economic recovery. She highlighted the need for more affirmative actions to support vulnerable and poor groups, as COVID-19 pandemic does not only affect health or economic aspects, but creates multidimensional problems.

Edi Prio Pambudi who is also the Co-Sherpa of the G20 explained how the G20 Indonesian Presidency would integrate input from the working  and engagement groups to ensure the adoption of G20 policies related to economic transformation and social policies. “Partial steps are no longer possible; what is needed is a collective action. We are happy to facilitate think tanks so that they can produce G20Think, something that leads from commitments to resulting policy references.” said Eddie.

This webinar event emphasized the need for collective action from all elements of the engagement and working groups to support the achievement of Indonesia's G20 Presidency. In this discussion, Edi as the G20 Co-Sherpa expressed his hope for an additional route, namely the academic track where academics and think tanks worked together to find a common ground to fight for the interests of developing countries. "Indonesia has been trusted with a task to build this bridge, and we will carry out this role by inviting everyone to focus more on accelerating the post-pandemic recovery process." said Eddie to close this webinar.