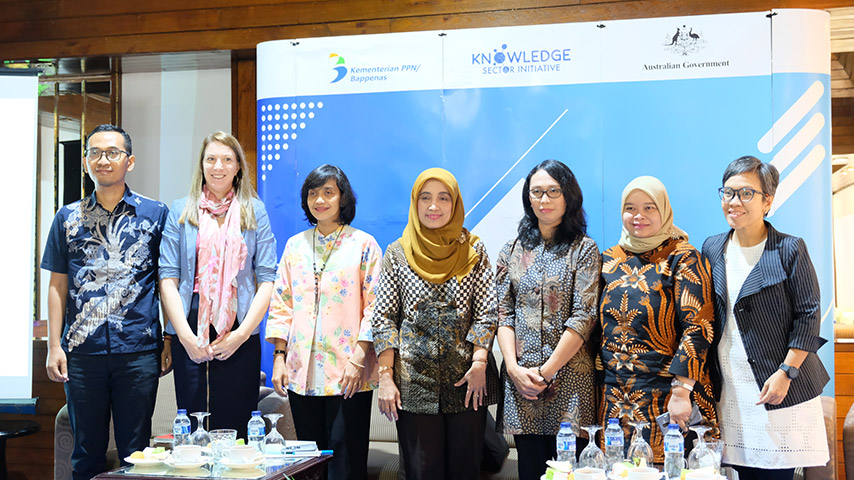 “There are much fewer female civil servants in management positions (eselon) than men,” said CW researcher Dirga Ardiansa at a KSIxChange held by the Knowledge Sector Initiative (KSI) on Friday, 22 February 2019. The topic for the event was ‘Women in the Bureaucracy: Affirmative Action vs a Merit System’.

The event was opened by Elisabeth Jackson, KSI Knowledge Exchange and Learning Lead, and moderated by Sri Budi Eko Wardani, from the Faculty of Social and Political Sciences at the University of Indonesia. Speakers included Reni Suzana, Head of the Planning and Finance Bureau of the State Administration Agency (LAN), Trisacti Wahyuni, Inspector of General Administration of the National Development Planning Agency (Bappenas), and Eunike Prapti Lestari Krissetyanti, Head of the Civil Servant Career Planning Sub-Division of the State Civil Service Agency (BKN).

CWI collected and analyzed data from two different periods – before the enactment of the State Civil Apparatus Law (2011-2012) and after the Law was implemented (2014-2016). The study showed that the proportion of female civil servants in 34 ministries remained stable at around 39 percent. However, only 22.38 percent of women held senior positions (echelon I-V) in 2011-2012, increasing only slightly to 23.48 percent after the Law came into force.

To complement this quantitative data, CWI conducted in-depth interviews with senior female civil servants. The study revealed that one of the barriers to women’s progression to senior positions is the practice of transfers to regional areas as a means of promotion.

“It is difficult for women to accept transfers to regional areas because they have to think about their children and get their husbands’ permission,” said Dirga.

In addition, the longer and less flexible working hours make it difficult for women to balance work and family responsibilities. As a result, women are often compelled to choose family over their careers, something that men rarely face.

Dirga calls this pattern of promotion an invisible obstacle for women in civil service, because it is not apparent in merit-based regulations such as the ASN Law. The current recruitment and promotion policy puts strong emphasis on merit but doesn’t recognize the reality of the gaps between women and men in civil service.

Inspector of General Administration in Bappenas, Trisacti Wahyuni, agreed with this and added that there are, in fact, six barriers or challenges that female civil servants face. These include a patriarchal bureaucratic culture, domestic household roles, gender stereotypes, lack of support in the work environment, women’s motivation to lead, and ‘neutral’ policies.

To address these barriers, Trisacti suggested additional facilities for women, such as day care and nursing rooms; policies that support gender equality, particularly related to promotion; cultural changes that make women equal partners with men; and extension and flexibility of the age limit for scholarship recipients.

“The age limit for scholarship recipients is usually 35. At that age, women are busy with young children,“ said Trisacti.

Inequality between women and men in bureaucratic positions is also evident in the regions. Eunike Prapti Lestari Krissetyanti, Head of the Civil Servant Career Planning Sub-Division of the State Civil Service Agency (BKN), said that a growing number of women were becoming civil servants. In 2018, around 51 per cent of the civil servants throughout Indonesia were women.

According to Eunike, the lack of women leaders is caused by regional bureaucracy. Career advancement of women civil servants in regions is slower than at the central level. In the regions, it takes 15-20 years for women civil servants to reach Echelon 4 positions, while in ministries or central institutions it only takes 4-6 years.

To address the problem of inequality of women civil servants at central and regional levels, Reni Suzanna, Head of Planning and Finance Bureau of LAN, spoke of the need to provide the right to professional development for women. That way, women who occupy structural positions have the capacity to produce good policies with gender perspective.

“Affirmative action is not just about increasing the number of women, but also increasing their capacity to produce gender-friendly policies,” Reni said. **