Discussion on the productivity and quality of social science research in Indonesia with ALMI. 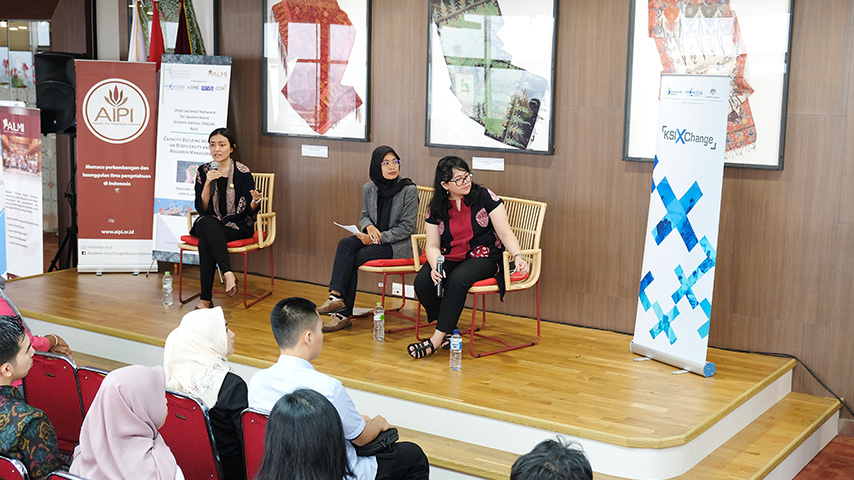 Social science research performance in Indonesia remains low, both in productivity and quality. The same also rings true even when compared to some countries with lower Gross Domestic Product (GDP). The government and all relevant parties need to pay serious attention to this matter by carrying out efforts to strengthen research performance in this country, because good research performance will generate high-quality public policies, which are ultimately crucial to advance the nation.

This was revealed from the research conducted by The Center for Innovation Policy and Governance (CIPG) and Global Development Network (GDN) on “Conducting Research in Indonesia”, which was completed in August 2019. This research outcome was conversed at length on the KSIxChange#13 event, a monthly discussion initiated by Knowledge Sector Initiative (KSI), collaborating with the Indonesian Young Academy of Sciences (ALMI). This event was held at the National Library Building, Jakarta, Tuesday (24/9).

Numerous speakers attended the discussion themed “Assessing the Social Science Research System in Indonesia”, including the Head Researcher, Dr. Inaya Rakhmani, who is also a lecturer at the Social and Political Sciences Faculty of the University of Indonesia, and a member of the researcher team, Dr. Zulfa Sakhiyya, a lecturer at the Language and Arts Faculty of the Semarang State University (Universitas Negeri Semarang), and moderated by Gita Putri Damayana, Executive Director of the Indonesian Center for Law and Policy Studies (PSHK).

Inaya stated that the subpar quality of social science research performance is consistent with the low productivity level from social scientists in this country. This can be indicated through insufficient academic social science publications in Indonesia compared to most middle-income ASEAN countries. From a handful of publications in international peer-reviewed journals, using the Social Science Citation Index (SSCI), only 12 percent of social science and humanity articles are written by Indonesian researchers.

“This is only half of what Malaysia and Thailand have achieved,” said Inaya, who is also a member of ALMI Working Body for Science and Community.

The budget allocation from the Government of Indonesia for research is also considerably low. Indonesia only allocates around 0.2% of its GDP for research. In 2017, this number was 6-10 times lower than in several Asian countries with lower GDP than Indonesia. As a comparison, Singapore allocates 2.2%, Malaysia 1.25%, and South Korea 4%.

The research from CIPG and GDN found that the low social science research quality and productivity have occurred since the Authoritarian Regime (1965-1998), where at the time, research organisations and institutions were designed to support developmental projects – and left with no room to criticise the government. Since 2010, the Government of Indonesia has made efforts to reform research policies through privatisation, marketisation, and internationalisation of higher education institutions.

However, said Inaya, because the bureaucracy system of social science research was initially established to serve the needs of the Authoritarian Regime, efforts to internationalise it has run into a structural wall. Meanwhile, the old culture remains intact and hinders the growth of a better research ecosystem; for example, a research system still designed only for the needs of bureaucracy and promotion mechanism decided by the state instead of academic professionalisation. This condition is exacerbated by the low research budget allocation, excessive research grant budget audit, and extremely deficient research mentoring.

“Add in the absence of peer review, and the research quality standard becomes untested,” continued Inaya, who is one of the researchers in the aforementioned GDN joint research.

Zulfa said that many researches from social scientists, regardless of their quality, are actually well communicated to the public and policymakers. In this case, she appreciates a number of mass media helping researchers disseminate their research results, such as The Conversation and Indoprogress. However, due to general lack of research performance, policymakers and the public are more exposed to social science research with poor theoretical quality.

One of the causes is the large proportion of assigned research by the government. This type of research not only produces weak analyses for policymakers but also widens the gap of research distribution.

“Because in general, it is dominated by research institutions based in Jakarta and Java. Also, the gender equality principle is often ignored,” said Zulfa.

Going forward, she said, the government must take full advantage of Law Number 11 year 2019 on the National Science and Technology System (Sisnas Iptek), which provides the national research system and performance as a foundation for improving the research ecosystem. The academic freedom principle needs to be fostered so that researchers are able to produce and disseminate their research, and contribute more towards policymaking.

Counterproductive issues from said Law, such as a criminal sanction on research licensing, must be avoided. “This criminal sanction is also obstructive to Indonesia’s efforts to promote international research collaboration, which is essential to improve the quality of research,” added Zulfa.

Support from Knowledge Sector Initiative (KSI)
As previously explained, there are several challenges to building a healthy knowledge sector in Indonesia, such as funding, quality, and availability of research. Knowledge Sector Initiative (KSI), a joint program between the Government of Indonesia and the Government of Australia that supports better use of evidence in policymaking. Through KSIxChange#13, in collaboration with ALMI, KSI provides a forum to share knowledge on the research environment in Indonesia and how to improve the quality of researches as well as to strengthen their relevance so that they can be used to support the policymaking process.