The discussion in KSIxChange#35 with the theme ‘The Importance of Policy Innovation in Optimizing Regional Potentials’ on Thursday 26 August discussed lessons learned from South Sulawesi in developing evidence-based policies and encouraging policy innovation in the regions. It is hoped that this knowledge-based policymaking approach can also be used in other strategic programs, can be replicated by other regions, and can answer the challenge in strengthening policy innovations.

Policy innovation is defined as the process of making new policies or regulations to achieve significant and systemic results for the public interest (Jordan & Huitema, 2014; Sururi, 2016; Wellstead & Nguyen, 2020). There are three categories of policy innovation: innovation in the policymaking process, innovation in policy directions and initiatives, and policies to promote innovation and its spread (Mulgan & Albury, 2003). President Joko Widodo has often stressed to his cabinet the need for breakthrough-driven thinking in tackling emerging problems and to remain within the corridor of good corporate governance. Breakthroughs can be present in all three categories of policy innovation, from policymaking, policy formulation, to the outcomes of these policies.

Policy innovation is also needed for optimal development at the local government level. Law Number 23 of 2014concerning Regional Government stipulates that local governments need to innovate to improve the performance of regional development, as they play a key role in deciding the most appropriate policies to be implemented for their regions. In South Sulawesi Province the local government is developing innovative policies through the Knowledge-to-Policy (K2P) pilot program that encompasses the policymaking process, policy formulation and outcomes of evidence-based policies.

There are various challenges in promoting policy innovation. Innovation faces at least three types of obstacles (Utomo, 2016). The first is those that arise from the bureaucracy itself. These include incompatibility between bureaucrats, scepticism, poor coordination, logistical problems, difficulties in implementing new technologies and so on. The second is those that arise from the political environment. The political environment influences the implementation of innovation as it holds sway over the provision of funding and other resources. The third type is obstacles from the external environment of public organizations, such as public apprehension about the effectiveness of programs, difficulties in reaching target groups, and resistance from the private sector that will be affected by the innovations (Borins, 2006). Another challenge that may also hinder policy innovations in Indonesia is the reluctance of regional leadership or institutions to replicate innovations that have been successfully implemented elsewhere (Utomo, 2016).

In the KSIxChange#35 discussion, KPPOD Executive Director Herman S Suparman provided an analysis of the state of regional policy innovations that require fortification in the midst of these various obstacles. Mr Suparman said the government’s efforts to promote policy innovation can be seen from three perspectives, namely innovation in policy, innovation in public services and innovation in policy design. Regarding innovation in policy, governmental policy support and commitment are seen as already sufficient, as indicated by regulations issued thus far. Likewise, public service innovations of the central and subnational governments, such as business permit services, licensing services and so on, have been positive. However, there is still some homework to be done in the policy design innovation aspect. Mr Suparman conceded that ‘study shows there are many problematic local regulations’.

According to Mr Suparman, local regulations that hinder policy innovation exist because there is not yet a standard process of policy design. These obstacles are more bureaucratic in nature and arise from the political environment. As tools for designing innovative policies are still being developed at centrally, there need to be other creative efforts to encourage policy innovation. In the context, Suparman regards the efforts of the South Sulawesi Bappelitbangda to do a collaborative study on the silk value chain as a good example of this. The study was a collaboration among elements of the government, academia and civil society produced a policy brief that promotes evidence-based policies. 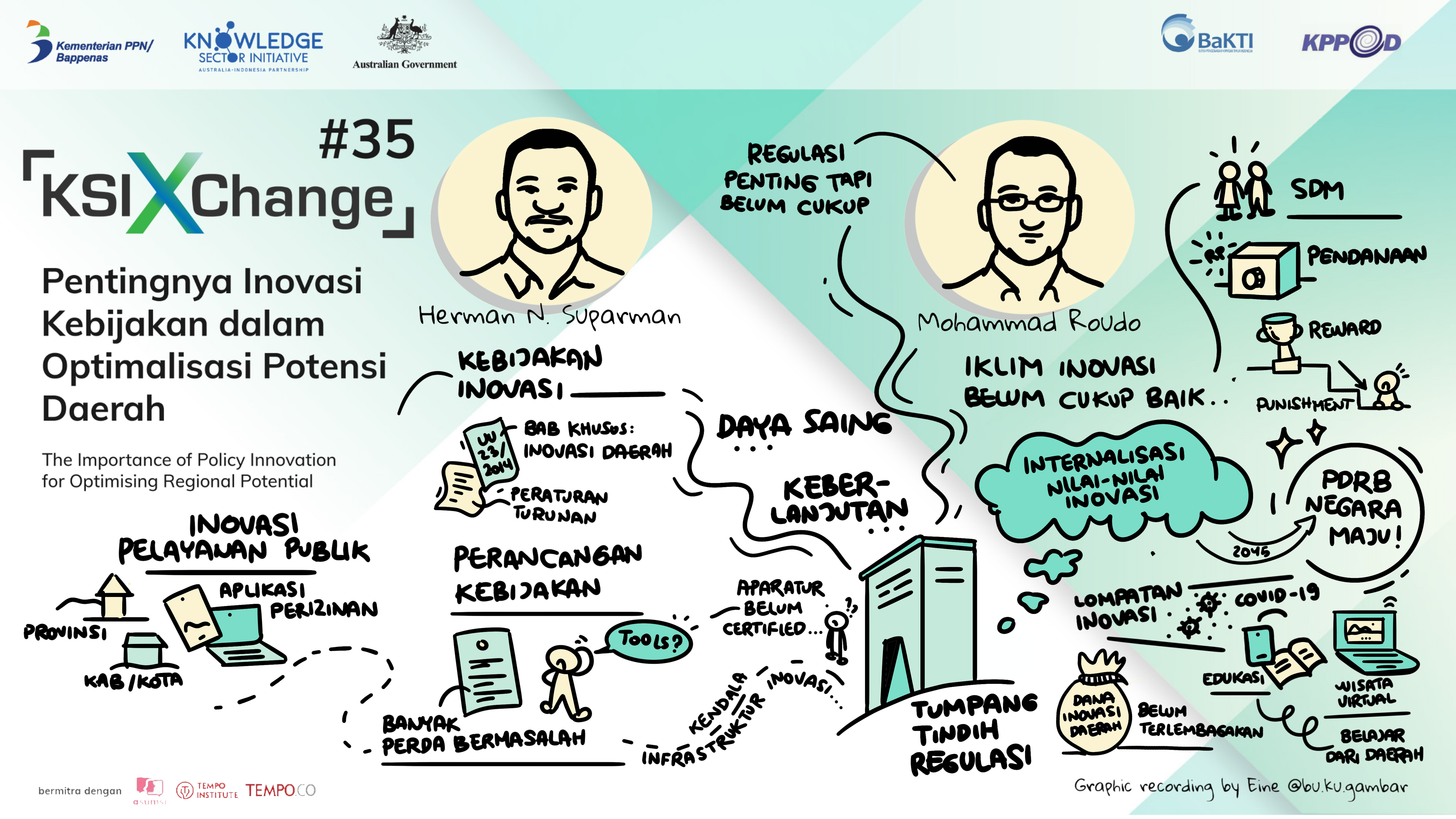 The South Sulawesi Provincial Government through its Regional Research and Development Planning Agency (Bappelitbangda) in collaboration with the BaKTI Foundation sought to carry out a collaborative study on the value chain of a local flagship commodity, in this case silk, and produce a series of policy recommendations. This approach is also being applied in the taro value chain study in collaboration with the PINUS Foundation of South Sulawesi. The South Sulawesi Bappelitbangda is currently preparing a Standard Operating Procedure (SOP) for collaborative studies that will serve as a reference for the implementation of cross-disciplinary studies, involving multiple stakeholders to solve problems faced by local governments. It is hoped that this knowledge-based policymaking approach can be used not only in commodity development but also in other strategic programs, which can be replicated by other regions. This can answer the challenge of strengthening policy innovations in replicating innovations that have been successfully implemented in other regions.

South Sulawesi Bappelitbangda researcher Yvonne M Salindeho explained that the South Sulawesi Provincial Government has learned a lot from the collaboration in the silk value chain study conducted with BaKTi Foundation and academics. The use of cross-disciplinary staff improved complementarity and led to higher quality research, more relevant to the needs of the community. Yvonne Salindeho was pleased to see research growing more holistic, visible ‘in its entirety from upstream to downstream’, compared to past research, which was ‘done in a piecemeal fashion’.

For the researchers involved, this collaboration opened up space for the exchange of ideas and insights, which will have an impact on increasing innovation capacity in the regions which will lead to increased productivity. ‘If one [piece of] research usually produces one policy brief, this value chain study produced four policy briefs, several articles and new ideas that can be developed in the future’, she added. The four briefs discuss recommendations to restore South Sulawesi silk in the upstream, manufacturing and downstream sectors, and across other sectors.

Rahmad Sabang of the BaKTi Foundation said that each stage of the silk value chain study was carried out in a participatory manner involving many parties. The choice to study silk – once a champion product in South Sulawesi – was not predetermined, but was the result of discussions to identify regional potentials that could improve the welfare of the community. Mr Sabang stressed that ‘without a comprehensive study, it would have been difficult to find what the government needs to promote the community's economy’.

According to Mr Sabang, the role of the BaKTI Foundation in the study is one of a knowledge intermediary that bridges and connects academics, community organisations, and knowledge producers in government research institutions with local governments as knowledge users. Learning from this experience, he believes that multi-stakeholder collaboration in this silk value chain study can be replicated in other sectors, in South Sulawesi and elsewhere. According to Mr Sabang, there are four aspects that need to be considered for successful replication: (1) the presence of a knowledge intermediary institution that is free from political interests, (2) a reliable figure in each institution involved in collaboration, (3) linkage between the activities and the Regional Medium-Term Development Plan (RPJMD), and (4) the vision and mission of the local government, as well as comprehension of the collaboration procedures set by the Ministry of Home Affairs. 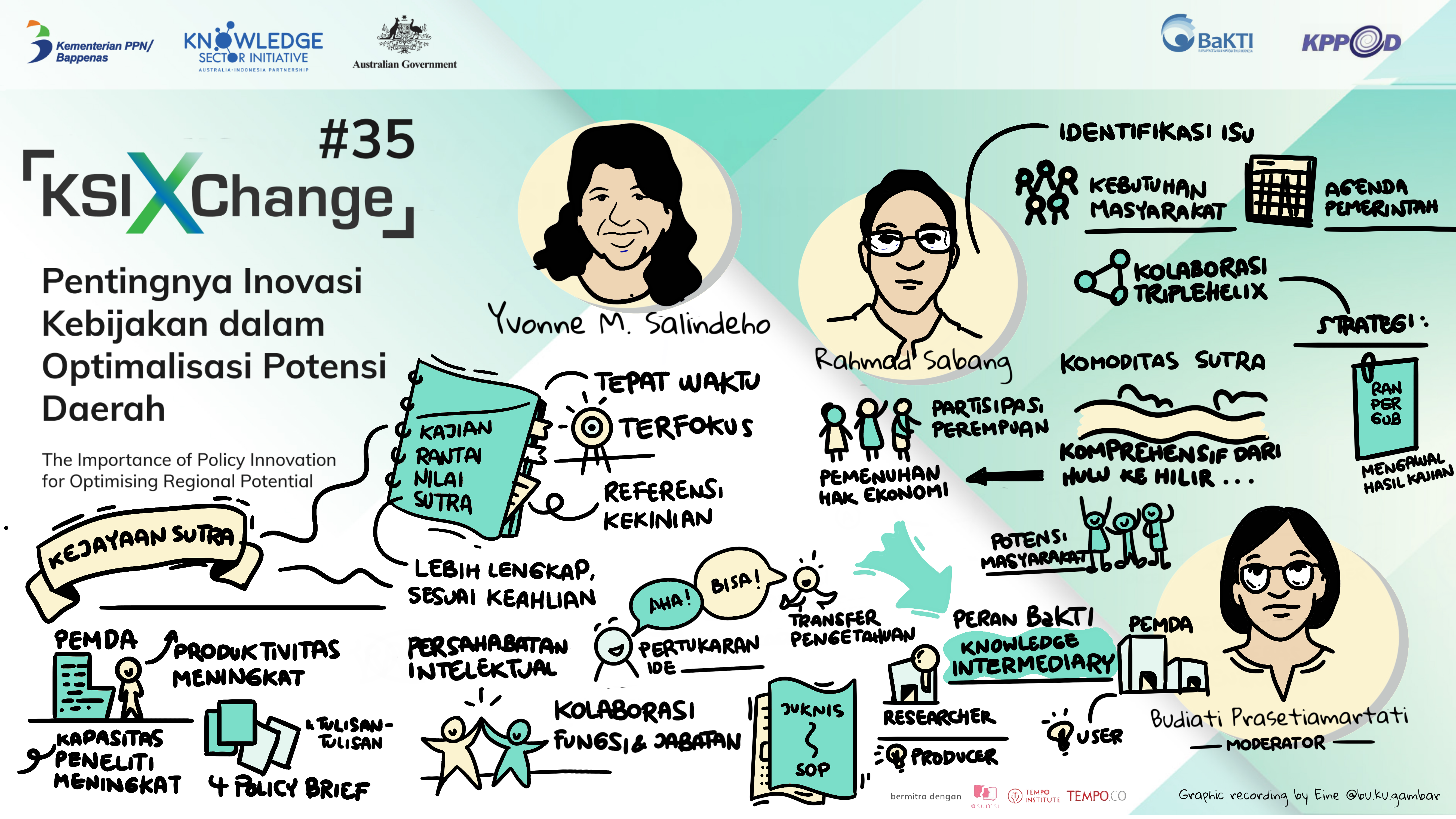 Regarding regional innovation, the Acting Director of Region II of the National Development Planning Agency (Bappenas), Mohammad Roudo said that regulations that promote innovation in the regions are already available. In addition to provisions in Law Number 23 of 2014 concerning Regional Government, derivative regulations related to regional innovation also exist. Nevertheless, there are other things that need to be satisfied to foster innovation in the regions. First, the innovation climate needs to be improved through an institutionalised reward and sanction system. Second, the values of innovation need to be effectively internalised at both the central and regional levels. Above simply being included in the National and Regional Medium-Term Development Plans (RPJMN and RPJMD), the implementation of these values needs to be monitored. Third, technical challenges that affect innovation, for example employee rotation, funding allocation, appreciation for researchers and so on, need to be addressed seriously.

In addition to these three, according to Roudo, multi-stakeholder collaboration to promote innovation is also necessary, especially in light of the regional High Innovation Index target of 36 percent set in the 2020–2024 RPJMN. ‘This knowledge-based policy cannot be carried out by the government alone, it needs to involve various parties’, he added.

The silk value chain study applies a multi-actor and multi-disciplinary collaborative approach as a manifestation of the multi-helix concept in the context of evidence-based policymaking in South Sulawesi. The key takeaways from KSIxChange#35 were that evidence-based policies are a necessity to optimise the potential of regions for the welfare of the people – and that to encourage innovation in formulating such policies requires multi-stakeholder collaboration. KSIxChange is an interactive discussion initiated by the Knowledge Sector Initiative (KSI), a partnership between the governments of Indonesia and Australia with funding from the Australian Department of Foreign Affairs and Trade (DFAT). KSIxChange, which is held at least once a month, aims to support the implementation of government programs by promoting public discourse based on the use of evidence in the policymaking process.