During the Pandemic, the Double Burden Holds Back Female Researchers

Female academics and researchers in Indonesia who have been working at home during the pandemic have to bear additional burdens and responsibilities. There needs to be an affirmative policy to support female researchers to continue working during a pandemic.

Female academics and researchers in Indonesia who have been working at home during the pandemic have to bear additional burdens and responsibilities. There needs to be an affirmative policy to support female researchers to continue working during a pandemic.

This was one of the discussion topics in the “KSIxChange#31: Challenges of Female Researchers in the COVID-19 Pandemic” on Tuesday (2/3). The event, held online by the Knowledge Sector Initiative (KSI), featured a number of speakers, namely the Minister of Research and Technology/Head of the National Research and Innovation Agency Professor Bambang Brodjonegoro, Director of Learning and Student Affairs, Directorate General of Higher Education, Ministry of Education and Culture Professor Aris Junaidi, Director of Asia Research Center of the University of Indonesia who is also a member of the Indonesian Academy of Young Scientists (ALMI) Inaya Rakhmani, Director of the Office of International Relations of the State University of Malang and member of ALMI Evi Eliyanah, as well as the Chairperson of the Center for Literacy Studies at Semarang State University and a member of ALMI Zulfa Sakhiyya. 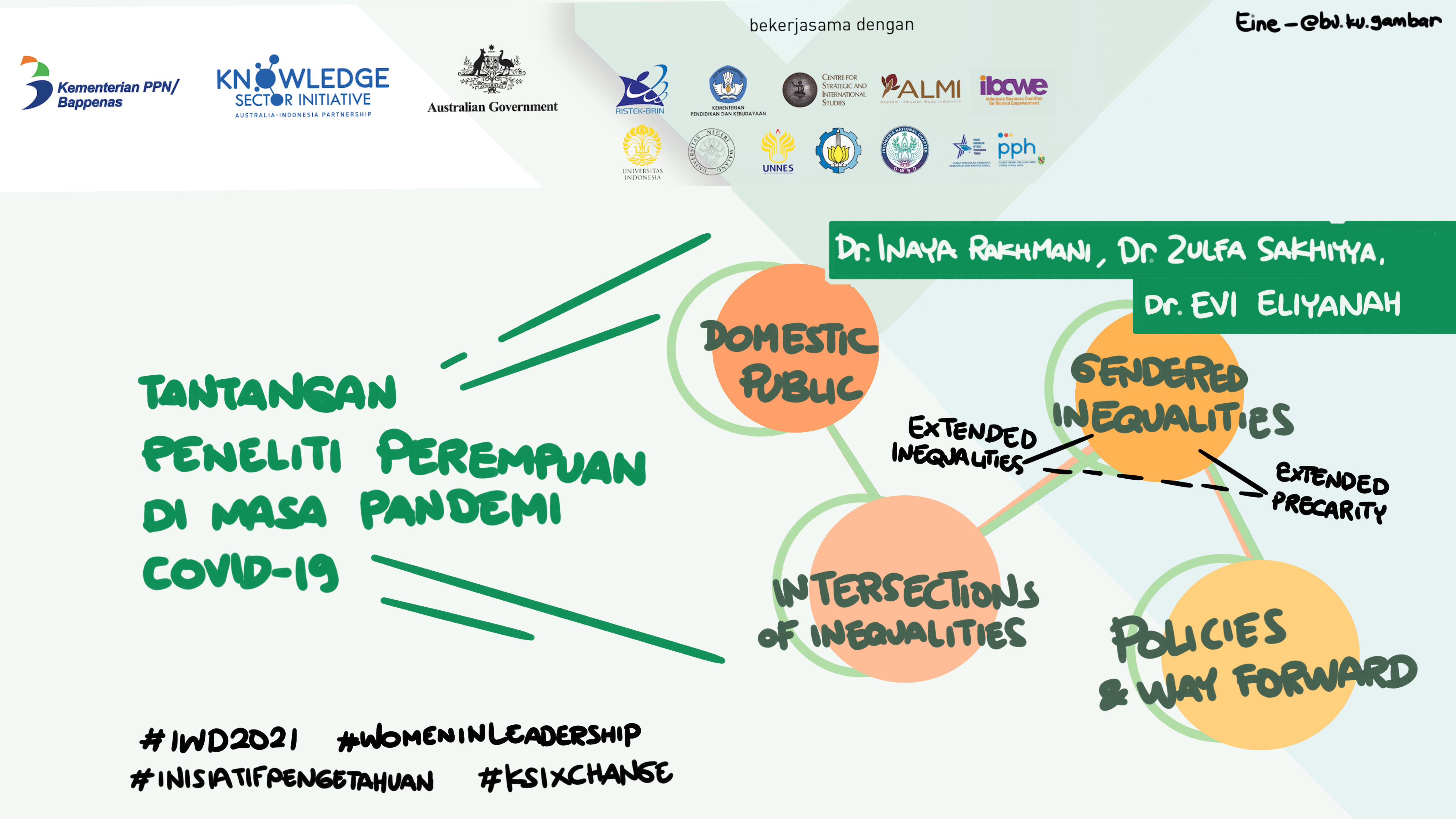 In his opening remarks, Simon Ernst, Counsellor for Development Effectiveness and Sustainability at the Australian Embassy in Jakarta, conveyed the importance of opening greater access for women. In his view, women still face cultural, socio-economic and political barriers to progress. The COVID-19 pandemic has exacerbated these conditions. In the context of research, the lack of a gender perspective has hindered gender-sensitive research-based policymaking. For these reasons, through KSI, the Australian government supports research institutions in Indonesia to produce research with Gender Equality and Social Inclusion (GESI) perspective.

Likewise, the Indonesian government also aims to promote the GESI perspective. The Minister of Research and Technology/Head of the National Research and Innovation Agency (BRIN), Bambang Brodjonegoro, explained the government’s plan to promote gender perspective in research. Minister Bambang greatly appreciated the role of female researchers during the pandemic. There are already various kinds of research products to support the handling of COVID-19 that involve female researchers. However, he understands that women face many obstacles during the pandemic, including the increment of double burden. For this reason, he encourages the involvement of female researchers, especially in the fields of disaster, health and social and humanities. The research produced by 27 female academics in the social and humanities field who work in both universities and the private sector found that female academics have to bear additional burdens and responsibilities when working from home. Inaya Rakhmani from ALMI presented the findings of research conducted with other ALMI members, namely Evi Eliyanah and Zulfa Sakhiyya. This study found that female researchers had to adjust when working from home, from changing teaching methods to setting up remote teaching tools while also doing domestic tasks. Their time for research and publication has decreased compared to male academics. On the other hand, they are increasingly marginalized by policies implemented by universities. However, such conditions are often seen as normal by the institutions where they work. “This cannot be seen as a personal problem for female researchers, but illustrates the existence of gender imbalances among researchers in general,” said Inaya. Evi Eliyanah added, despite the increasing number of female academics and researchers, the role of women in STEM remains low. This is where fundamental research with a GESI perspective is important to find out why publications by women are lower.

Meanwhile, Zulfa Sakhiyya highlighted the Merdeka Belajar – Kampus Merdeka (MBKM, Freedom to Learn – Free Campus) program launched by the Ministry of Education and Culture. Technically, this policy requires universities to change the curriculum. The burden of changing the administrative requirements of MBKM is felt by women who are heads of the study programs. They find it difficult to maintain a rhythm for writing and publishing due to the administrative burden. “MBKM policy needs to be more sensitive to GESI elements,” she added.

The lack of women’s role in STEM was recognized by the Director of Learning and Student Affairs of the Ministry of Education and Culture, Aris Junaidi. Research in STEM is still dominated by men, which is why it is important to have female role models among STEM researchers. Additionally, the ministry is also promoting equality through many programs, including scholarships and research funding with a gender perspective through BRIN. Likewise, IBCWE founder Maya Juwita said that in the private sector, the prevailing keyword is how the issue will be useful for business. Research on economic empowerment and gender equality will be seen as attractive if it is packaged with an explanation about the effects and benefits for the business world. Meanwhile, Evi Sukmaningrum of PPH-PUK2IS Atmajaya said that COVID-19 compounded the injustices faced by women in academia. For this reason, apart from equal opportunities, it is necessary to see whether the existing facilities have accommodated women’s needs or not.

This KSIxChange discussion will be the beginning of KSI’s activity planning for 2021 as an effort in ensuring the sustainability of advocacy for mainstreaming of the GESI perspective in research and community service in Indonesia. This is in line with KSI’s key strategy, which is to position female researchers in strengthening the knowledge and innovation ecosystem to ensure that the government can produce more gender-sensitive policies.

KSIxChange is an interactive discussion initiated by the Knowledge Sector Initiative (KSI), a partnership between the Indonesian and Australian governments with funding from the Australian Department of Foreign Affairs and Trade (DFAT). KSIxChange, held at least once a month, aims to support the implementation of government programs through promoting public discourse based on the use of evidence in the policymaking process.