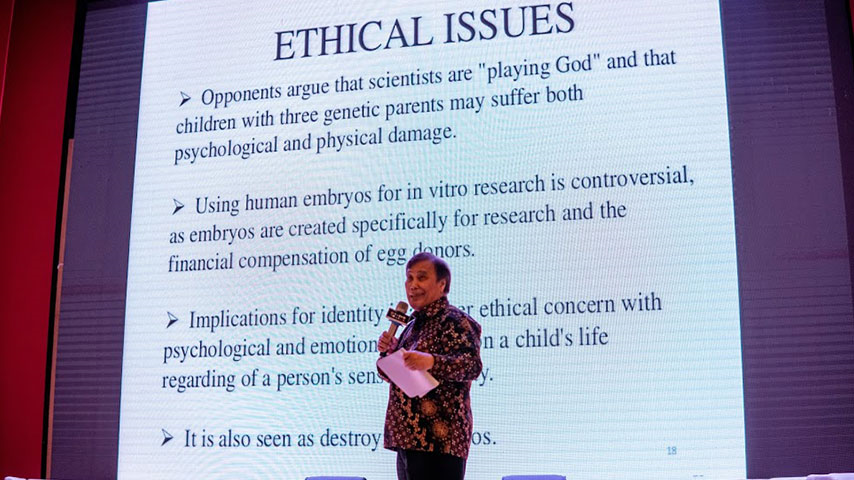 That was raised in the seminar "Indonesian Stage 2045: Meet Young Scientists” in a series on Tempo Media Week, Saturday (7/12) at the National Library of the Republic of Indonesia, Central Jakarta. The seminar was held by Knowledge Sector Initiative (KSI) in collaboration with the Tempo Institute to raise awareness about the main challenges concerning the research ecosystem in Indonesia. This discussion was expected to trigger policy improvement in the field of research and development (R&D) to encourage public policy making that is  based on evidence, data and analysis.

In his presentation, Marzuki mentioned a number of challenges faced by today’s efforts to encourage research, namely the rapid development of big data technology which should inform research development, ethical issues when using the most cutting edge technology in research, the boundary between basic and applied research that is increasingly blurred, and development of scientific activities within the not-so-conducive ecosystem.

Marzuki said, one important aspect to support development of research ecosystem is the availability of funding. So far, research funds have been allocated from the state budget (APBN). However, the way these funds are managed is not in accordance with research needs. “The funds are provided every year, with disbursement taking place in March. However, as early as the following November the complete annual report will have to be submitted," he said.

According to him, it would be good if the research fund is managed by an autonomous institution that encourages researchers to compete for funds. In addition, funding should be provided for long term schemes, for example five to ten years, making it possible for research process to more intensive and outcomes will have more leverage. "Competition is healthy, so just provide long-term grants which are subject to extension based on performance," he said.

Regarding funding, Ibnu Nadzir argued that one of the biggest challenges in improving the research ecosystem is funding.       Based on his experience, the research funding model which relies on allocation from the state budget so far has actually distanced the research from its success. Therefore, research management must be detached from the bureaucratic model.

Ben Laksana also agreed to a research funding institution that could provide a long-term research scheme. However, he also put forward some concerns about the purpose of research. So far, there have been many discussions about the relationship between research and the industrial world, assuming that research is held to meet the needs of industry, making them feel responsible to contribute financially to support research. However, in reality, there are many types of research including those which do not aim at meeting industry needs or supporting government programs. Rather, they assess and give criticism on the effective policies. This type of research is important to support democracy and closely related to the welfare and development of a nation. Therefore, this research deserves to also be supported by available funding.

Rara Sekar added that funding and independence are everyday concerns for a freelance researcher like herself. She must think of ways to obtain research funding that will not interfere with her independence as a researcher. If you are not part of a certain research institution, limited funds will be your continuous worry. She admitted several times she could not go to a global conference abroad to present the results of her research because she did not have the funds to buy tickets or arrange for a visa. “Though actually we need to be involved in the global dialogue to present the Indonesian narrative. I am independent, so it is very difficult to access funds. In the future we need more flexible funding options for young researchers to do research on problems in the society, “she said.

Research management policies greatly affect the results of research, and the other way is also true:  the results of research can also inform policy making.     Biomaterial Researcher from Bogor Agricultural University (IPB), Yessie Widya Sari said, a bona fide scholarship targeting smart students to study abroad does not guarantee that students will return to Indonesia. As a result, some quality human resources will be lost. Therefore, she suggested that master’s course students at domestic colleges should also be given the opportunity to study in a sandwich program, allowing them to spend some time studying abroad, considering many of them conduct interesting studies for their master’s degree. "When graduate students have the opportunity to join the sandwich program, I'm sure their quality will skyrocket," she said.

In addition, she also mentioned that there are regulations that hinder the publication of research. In the field of nanotechnology, for example, there are already many research results in Indonesia. However, the researchers are not always able to publish their work because of the issue of distribution permit since the government has not regulated the nanotechnology-based products.

Regarding the research policy, UN Pulse Lab Data Scientist Muhammad Rheza revealed that until now some government institutions still show reluctance to disclose data due to political reasons. The regulation on public information disclosure apparently does not fully succeed in making government institutions feel confident to open their data. This must be changed if we want to create a better research ecosystem.

Regarding the impact of research on policy making, Rheza said the government has always tried to make policies which are based on data. However, the data does not necessarily describe what is really happening in the community. Data may define an area as a poor area, but people in that area may not necessarily feel poor. Therefore, in addition to the existing data, there must be other data collected by anthropologists and ethnographers. "So, if you want to make a policy, it would be good if big data is combined with thick data so that the policy will be more precise," she explained.

The founder of Youth Laboratory Indonesia Muhammad Faisal also mentioned the distance between research results and the real problems faced by the community.        This cannot be separated from the condition of researchers / lecturers on campus who are more preoccupied with administrative matters. The results of his research on young people over the past ten years indicate that the perception of the campus world towards young people is very different from what they find in the field. "When I was on campus, many of my lecturer friends were burdened with administrative task and the requirement to conduct research, while we know that research is sort of art; we need some inspiration to do it. In the end, everyone just aims at writing journals. I took the initiative to create my own institution and found out myself that the young people perceived by academic institutions and those I came across personally are very different, "he said.

Therefore, he was grateful that he managed to establish his own research institute. This way he did not have to be overwhelmed and exhausted by all the administrative demands. Faisal reminded; world’s phenomena happen faster than what can be captured by academic research. For this reason, there must always be new initiatives either by forming communities or associations to capture problems in society so that the distance between research and real problems in society can be reduced.