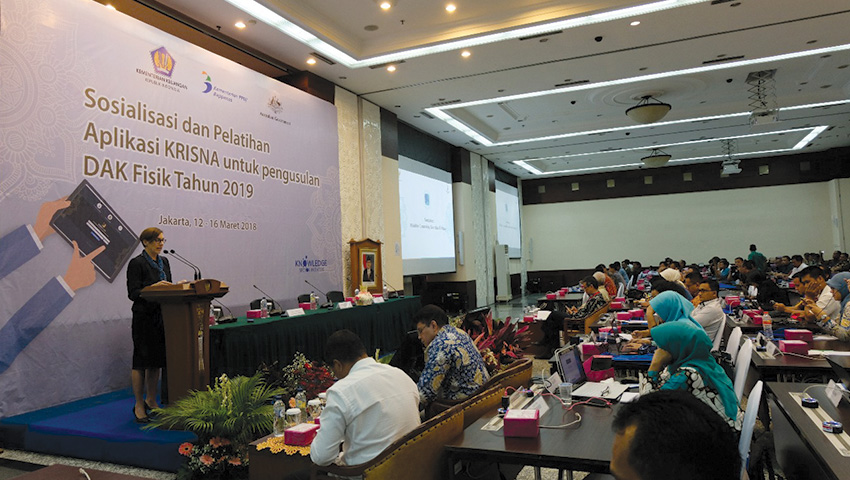 The launching, which was followed by a series of workshops, was held at the Bappenas office, Central Jakarta, on March 12-16. Attending the event were 1,200 officials from Development Planning Boards (Bappeda) from all provinces, regencies and cities in Indonesia and representatives of several relevant ministries.

Since 2016, local governments have been able to file requests for DAK to the central government through Bappenas. DAK is crucial to the improvement of public services and infrastructure in the regions.

The policy is in line with President Joko Widodo’s pushfor bottom-up development planning which can accommodate the needs of the local government.

Given that, at the suggestion of KSI, Bappenas decided to add a feature for DAK to its KRISNA e-planning .

Since its launching in April 2017, KRISNA has been used by 125 ministries and state-institutions to develop and revise their budget plans for 2018 and 2019.

The KRISNA-DAK system can be used for the whole process of budgeting, from the submission of proposals, to assessment, and selection. The system is also connected with the Ministry of Finance’s budgeting application system, SINKRON.

Bappenas has said it hopes the DAK application system can accelerate the process of selecting DAK proposals. Representatives of local government will not have to come to Jakarta to submit the DAK proposals, thus making the process more efficient.

The Deputy forRegional Development of Bappenas Rudy Soeprihadi Prawiradinata said the system would simplify the exchange of data between the ministries and institutions.

“The system will also prevent the duplication of proposals, in addition tosimplifying the process of proposal submission. There is also a feature for tagging which facilitates users to identify similarities between programs and activities,” Prawiradinata said.

Prawiradinata went on to say the system would improve coordination at sub-national level.

The development and launch of the KRISNA-DAK application was supported by KSI.

“KSI’s role is to accelerate and strengthen the Indonesian government’s efforts to develop a strong development planning system. Australia is therefore pleased to support Bappenas to use KRISNA to make planning and budgeting for the DAK more efficient and effective,” said Fleur Davies, Minister-Counsellor, Governance and Human Development of the Australian Embassy, Jakarta, during the event.