Knowledge and Innovation is the Foundation of Development

Countries with knowledge-based economies have proven to be more resilient in dealing with emerging issues, such as the COVID-19 pandemic. As the key towards a knowledge-based economy, the knowledge and innovation ecosystem must be formed and continuously improved to become the foundation of development. That was the discussion in Kompas Talks with the theme “Improving the Knowledge & Innovation Ecosystem for a Better Indonesia” on Tuesday (16/3).

That was the discussion in Kompas Talks with the theme “Improving the Knowledge & Innovation Ecosystem for a Better Indonesia” on Tuesday (16/3). This online discussion was held by the Knowledge Sector Initiative (KSI) together with the Kompas Daily. Present as speakers were Minister of National Development Planning/Head of National Development Planning Agency (Bappenas) Suharso Monoarfa, Minister of Research and Technology/National Research and Innovation Agency (BRIN) Bambang Brodjonegoro, Minister of Administrative and Bureaucratic Reform Tjahjo Kumolo and senior researcher of the Indonesian Institute of Sciences (LIPI) Dewi Fortuna Anwar. In addition, Institute for Development of Economics and Finance (INDEF) economist Aviliani and Director of Unilever Indonesia Herni Raharja were also present as responders. The event, moderated by Kompas Senior Editor Ninuk Mardiana Pambudi, was broadcast live on the Kompas Daily YouTube channel. 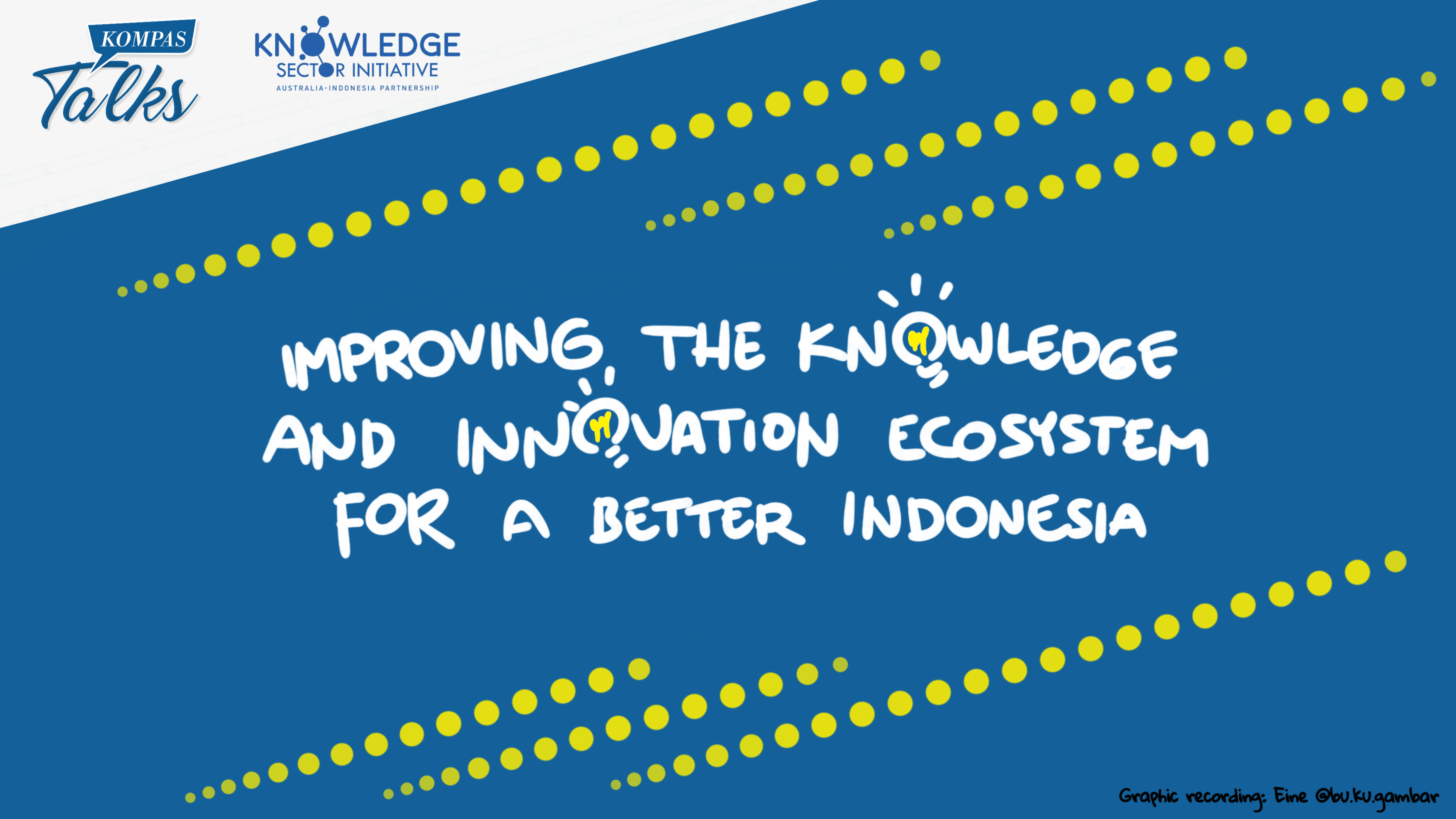 On this occasion, some of the topics were taken from the Knowledge and Innovation Ecosystem Blueprint. The Blueprint is Indonesian government’s attempt to work with its knowledge ecosystem partners to formulate strategies and recommendations to face the bigger development challenges in the coming years, through knowledge and innovation.

The event was opened by Kirsten Bishop, Minister Counselor at the Australian Embassy in Jakarta. She appreciated the Indonesian government’s breakthrough to strengthen the knowledge and innovation ecosystem. A number of supporting policies have been published to this end, starting from the “one data” policy, the Law on National System for Science and Technology, the establishment of the National Agency for Research and Innovation (BRIN), and the research endowment fund. All of this is very important for efforts to boost Indonesia’s economic growth. “Australia is honored to continue supporting the Indonesian government to use knowledge for evidence-based policymaking,” she said.

Dewi Fortuna Anwar said that a fundamental matter in efforts to strengthen the knowledge and innovation ecosystem is scientific temper. The term that was coined by Jawaharlal Nehru in 1948 was used to describe the adventurous trait of exploring new truths and knowledge which entails openness to dare to change old opinions based on new evidence. A scientific temper of knowledge and innovation actors will greatly contribute to the resilience of innovation in a country. “In the aspect of decision making, this will encourage evidence-based policies,” she said.

The state of Indonesia’s scientific temper and innovation can be seen from a number of indicators. The 2020 Global Innovation Index places Indonesia 85th out of 131 countries, and the lowest among ASEAN countries. Other data shows that Indonesian scientists are among the biggest contributors to predatory journals, at 16.73 percent. Additionally, there is an issue of plagiarism on campus. Academics pursue credit scores to advance their careers as state civil servants, ignoring the quality and reputation of publications. 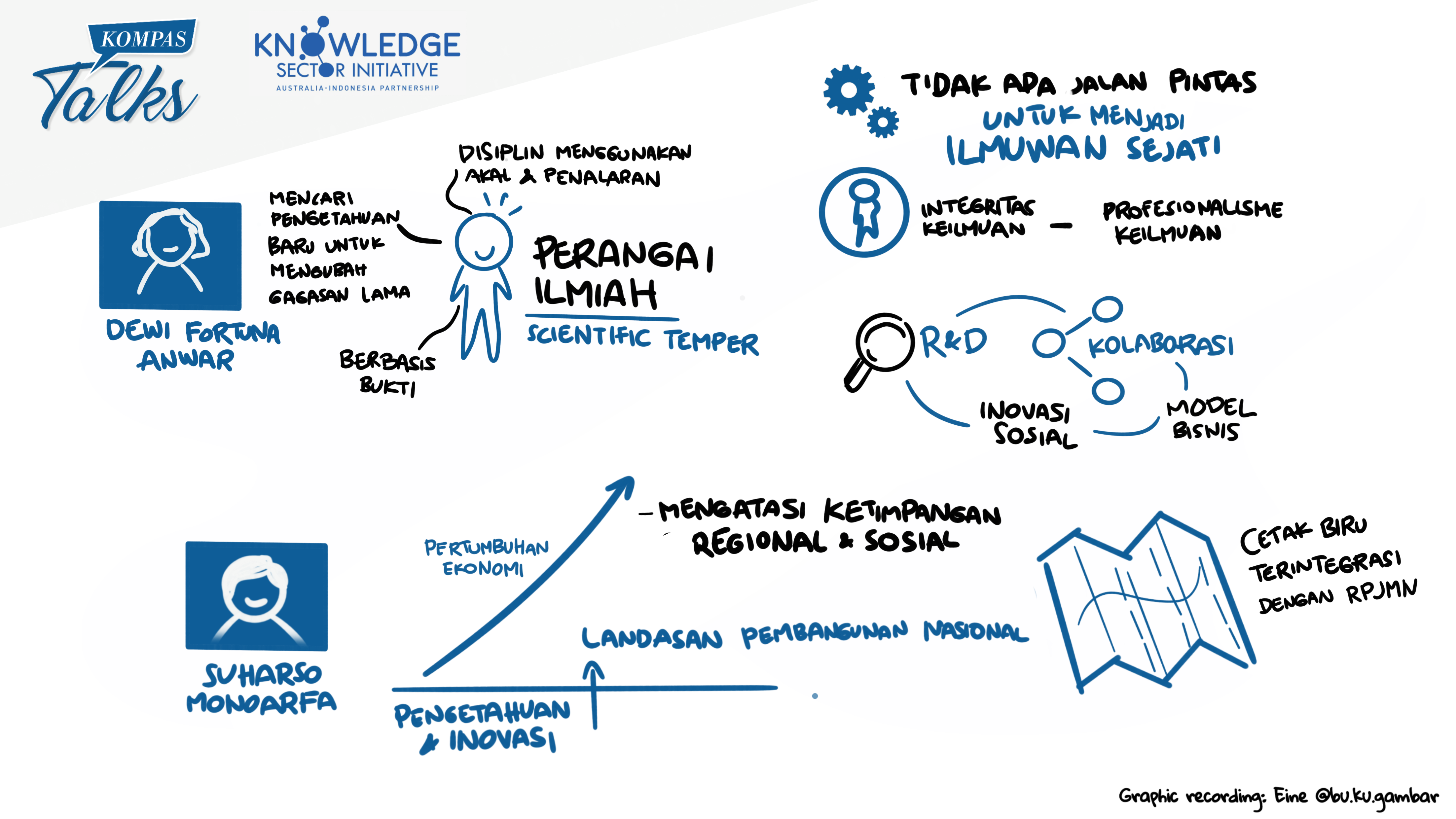 Suharso Monoarfa explained, in the Indonesia 2045 vision, Indonesia becomes a developed country with high income. Efforts to achieve this vision must be built on a foundation of knowledge and innovation. “To improve the knowledge and innovation ecosystem, three things that must be done. First, ensuring that priority strategies in the knowledge and innovation ecosystem blueprint are accommodated in the government’s work plan. This will be carried out by all relevant government levels and Bappenas as a clearing house will try to guard it. Second, ensuring that the blueprint is integrated into the Medium-Term National Development Program (RPJMN) as well as in the long-term national development plan for 2025-2045. Third, ensure that the multilateral discussion process runs smoothly and effectively”. He added that knowledge is no longer just a sector, but a foundation for development.

Bambang Brodjonegoro said that the Indonesian economy has thus far been based largely on natural resources and efficiency of the economic structure. Learning from the experiences of other countries, an inclusive innovation-based economy has proven not only to promote economic growth but also to reduce poverty. When its economy grew to become the country with the largest income in the world, China also succeeded in reducing poverty levels by ensuring an even distribution of income.” An innovation-based economy is not only oriented on growth, but also economic equality and poverty alleviation,” he said.

To achieve this, Indonesia needs to focus on innovating in superior and important sectors, namely sectors related to natural resources and digital technology. In addition, basic research and scientific development need to be promote along with efforts to connect knowledge actors with business actors. 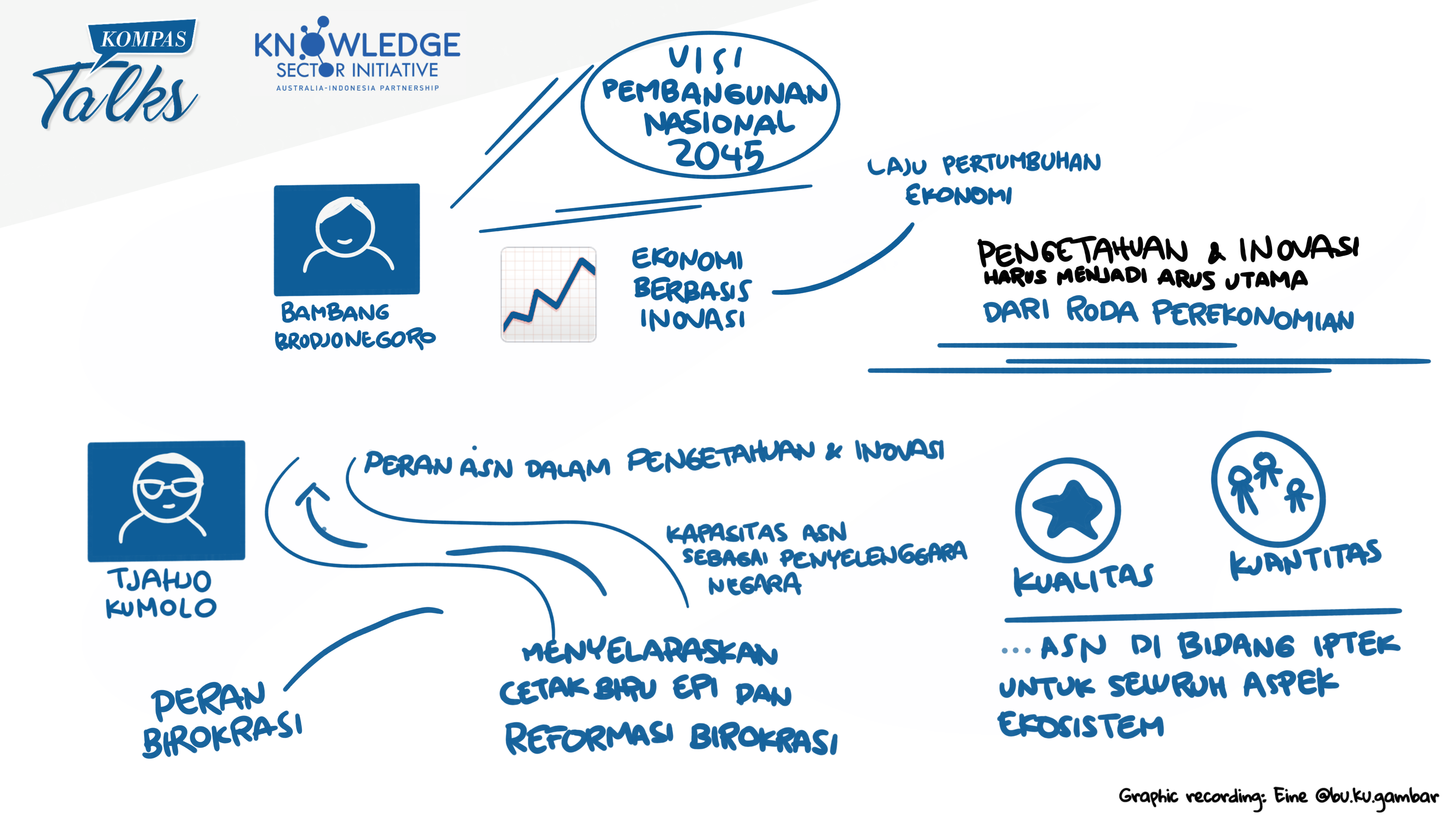 On strengthening the knowledge and innovation ecosystem, Tjahjo Kumolo said that state civil apparatus (ASN) has an important role. ASN is an intermediary in the use of knowledge for policy analysis, producing knowledge through research and development, assessment and application, and developing policies that support the production and dissemination of knowledge. “Ministry of Administrative and Bureaucratic Reform plays a role in ensuring the implementation of the knowledge and innovation blueprint by promoting supportive policies,” he explained.

Responding to the speakers presentations, Aviliani said that the Indonesia 2045 vision requires integration between various parties, including between ministries, sectors and import players, academics with business actors, and so on. The aim is to increase competitiveness, import substitution and increase exports. To achieve it, what needs to be encouraged is innovation in the competitive sector. The private sector can actually innovate as long as it is supported by a good incentive system because innovation requires high costs. This includes tax incentives. “It does not have to be all sectors, but sectors with high multiplier effect,” she said.

Herni Raharja said, cooperation for innovation is really needed. She had been using research results from government research institutions as well as universities. Since 2001, for example, Unilever has collaborated with Gadjah Mada University to develop malica black soybeans as an ingredient in soy sauce. There is also a similar cooperation with the Bogor Agricultural Institute (IPB), the University of Indonesia (UI) and others. Companies like Unilever strongly need knowledge and innovation in the field of agriculture. Additionally, improving human resources to foster digital transformation is also key as Indonesia still lacks human resources in this field.

Development of a Knowledge and Innovation Ecosystem is the key for Indonesia to overcome the many development challenges. Policymakers and key stakeholders have committed to work in synergy to shape and continue to improve this ecosystem.